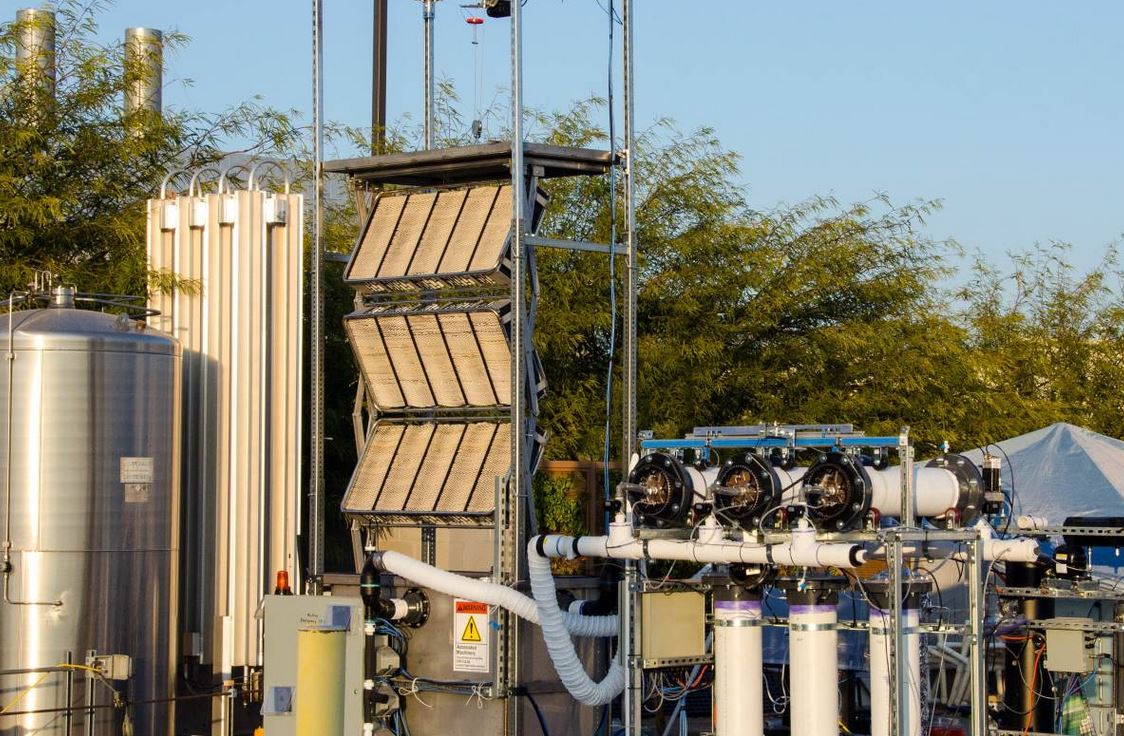 With Climate Change front and centre in the news, it is with great timing that the Committee for Climate Change launch their latest report, entitled “Net Zero The UK’s contribution to stopping global warming” with the encouraging message that the more ambitious goals that it outlines are deliverable using existing technology and that the benefits will greatly outweigh the costs.

Powerhouse Bosch is partnering with leading fuel cell stack manufacturer Powercell to develop and license a new line of hydrogen fuel cells for automotive applications. The new partnership is a realization that hydrogen fuel cells have the potential to become a significant portion of the automotive market over the next decade, according to Bosch.The new push into fuel cells for Bosch is founded on the core belief that the automotive world will transition to new energy vehicles in the next decade. Bosch believes that, “as much as 20 percent of all electric vehicles worldwide will be powered by fuel cells by 2030,” according to a recent press release.
Bosch is clearly looking to collaborate in different fuel cell technologies and applications. Last year itdid a deal with  Ceres Power to co-develop solid oxide fuel cells for stationary applications. (cleantechnica)

RES has pointed to the introduction of a new O&M tool as being behind a recent 12% boost in productivity at a 100MW solar portfolio it manages.
The rise in performance is down to a new Reliability and Operations Integrity (ROI) tool, the renewables company said, which mitigates plant reliability issues by systematically assessing and hurdling risks.
The tool came as part of a programme designed and led by RES after its appointment as asset manager of eight UK-based solar farms in 2014. Two years later its service provision was expanded to include operations and maintenance (O&M).
The ROI tool undertakes a component-by-component assessment, which measures the criticality of its function, Mean Time Between Failure, Mean Time To Repair and what the current prevention controls and failure detectability are.
RES then allocates a quantified ‘Lifetime Failure Risk’ (LFR) to each piece of equipment, allowing present risks to be prioritised and then mitigated. (solarpowerportal)

Patience is a virtue. After a long wait, UK customers can now place their orders for the Tesla Model 3 — for June delivery. Prices for the Standard Range Plus, which includes Autopilot, starts at £39,850 (on-the-road price, after incentives). Get your order in quickly if you want early delivery. (cleantechnica)

Hive Energy has entered into a consortium with battery storage firms CellCube and Immersa to joint build grid-scale solar-plus-storage projects using CellCube’s vanadium redox flow batteries, with a maiden project already in the works.
HICC Energy, as the consortium has been billed, was founded last week and will look to bring a portfolio of projects to market utilising third-party project financing.
The companies are currently in the process of development their first site, scheduled to go live later this year, and remain open to considering additional sites.
The trio cited new opportunities for long duration batteries created by the derating methodologies adopted by grid operators in the UK when factoring their capabilities in markets like the country’s Capacity Market.
Those derating factors have been designed to reflect any given project’s capability to respond to energy system stress events over the course of four hours, meaning that projects with longer durations than more prevalent lithium-ion technologies are better reward. (solarpowerportal)

At Imperial College London’s new campus in West London, some rooftops will soon hold bright green “biosolar” panels covered with algae. The plants suck carbon dioxide out of the air and produce fresh oxygen at a rate 100 times faster than trees covering the same amount of land–and then the microscopic organisms can be harvested to be used in food.
“We call it a ‘BioSolar Leaf,’” says Julian Melchiorri, CEO of Arborea, the company that designed the new technology. “It uses solar energy, but instead of converting solar energy into electricity [like a solar panel], we convert solar energy into food.”
Melchiorri, who graduated from a joint masters program at Imperial College London and the Royal College of Art in 2014, is primarily focused on using the technology at a larger scale to produce ingredients. It’s a way to produce more protein in a given area than any other type of food production; the algae are also a source of antioxidants and other nutrients. In pasta, for example, the algae can be used to add protein. (fastcompany)

If Electric Car Maker Enovate Can Produce An EV With A Solid-State Battery, Everything Changes

Chinese electric vehicle maker Enovate, which already has an all-electric SUV on the market, says they will bring a new vehicle to market in 2021 that will feature a holy grail of sorts in terms of its power source: a solid-state battery for motive power.
The new vehicle, called the Enovate ME-S or ME Sport, is a high-performance sedan with a futuristic design that includes cleaving doors (often called “suicide doors”), multiple interior screens, 5G connectivity, biometric analysis tech (hopefully to see if the driver is awake or at least not lost in their phone) and a warning system for pedestrians among other features, some of which sound a bit more sci-fi than production-ready.
The ME-S will reportedly go 0 to 60 in a touch over three seconds, putting it in competition with Tesla’s multiple offerings that are already available in China. That is, if Enovate can make good on its promise of a solid-state battery, which won’t be easy. (forbes)

Demand for more reliable electricity from a district of the Republic of Bashkortostan, a federal subject of Russia, will soon be answered by the largest hybrid solar and energy storage project in the region to date.
Russian developer and PV manufacturer Hevel Group will build a 10MW PV plant in the Burzyan district and will issue a tender for a storage partner to provide an 8MWh lithium-ion battery system.
The area is at risk of blackouts as power is supplied to it via a 100km single-circuit transmission line with a dead-end substation, and during power outages schools and hospitals can only use diesel generators for backup power at presen
tThe distributed generation system will be able to work both on- and off-grid, feeding into the grid when it is functioning or supplying power directly to Burzyan when supply from the grid is cut. (energy-storagenews)

With excellent timing, whilst climate change is front page news, the CCC have issued a report that updates suggested long-term emissions targets for the UK and recommend a net-zero target for the UK by 2050 (2045 for Scotland and 2055 for Wales)
Three key arguments are presented:
1. The foundations are in place throughout the UK and the policies required to deliver key pillars of a net-zero economy are already active or in development.
2. Government policy needs to ramp up urgently. The Committee’s conclusion that the UK can achieve a net-zero GHG target by 2050 and at acceptable cost is entirely contingent on the introduction without delay of clear, stable and well-designed policies across the emitting sectors of the economy. Government must set the direction and provide the urgency.
3. The overall costs of the transition to a net-zero economy are manageable but they must be fairly distributed. Rapid cost reductions in essential technologies such as offshore wind and batteries for electric vehicles mean that a net-zero greenhouse gas target can be met at an annual cost of up to 1-2% of GDP to 2050. However, the costs of the transition must be fair, and must be perceived as such by workers and energy bill payers. (ccc)
Download the report HERE
I like their infographic:

Upcycled tower block of the week

Danish architecture firms Lendager Group and TREDJE NATUR want to prove that building tall doesn’t need to come at the cost of the environment or human comfort. That’s why the two firms teamed up to design CPH Common House, a proposal for the world’s first upcycled high-rise in the Ørestad area of Copenhagen. Draped in greenery, the stepped building would be built from upcycled materials “to an unprecedented extent” for an estimated 1,174 tons of carbon emission savings in the building phase. (inhabitat)

America’s clean energy revolution is on the verge of a tipping point.
The renewable energy sector is projected to generate more electricity than coal during the month of April, according to a recent report published by the Institute for Energy Economics and Financial Analysis. That’s never happened before.
Coal, long the king of the power sector, has already been dethroned by natural gas, a much cleaner burning fossil fuel. Now, coal is facing intensifying pressure from wind and solar power.
The IEEFA report cited US government statistics that project renewable energy (hydro, biomass, wind, solar and geothermal) will start to sporadically exceed coal in 2019 and 2020. In other words, this year renewables will likely start to generate more energy than coal’s 240 gigawatts of remaining capacity, at least on a month-by-month basis, according to the US Energy Information Administration. (cnn)

Leading developers either stayed away or recorded limited participation in the seventh national-level wind energy tender. The Solar Energy Corporation of India (SECI) had offered 1.2 gigawatts of capacity at the national level. However, bidders placed bids only for 600 megawatts. According to media reports, only four bidders placed bids for the tender. Adani Green Energy (250 megawatts), Engie (200 megawatts), Sprng Energy (100 megawatts), and ReNew Power (50 megawatts) placed bids. Among the major issues that plague the project developers are limited project sites, land acquisition, and tariff threshold set by SECI. (cleantechnica)

Researchers in Ghana are testing a system that will turn cocoa into biofuel — but don’t worry — it uses the green waste produced during harvest, so you can still eat all of the chocolate! The project is funded by the University of Nottingham in the United Kingdom and will be tested in Ghana, one of the world’s largest producers of cocoa.
Chocolate is a multi-billion-dollar international industry, with the bulk of cocoa coming from Africa. Husks are typically discarded during harvest after the beans are extracted. Usually, the husks are left to decompose on the cocoa plantation while the beans head to fermentation and drying facilities before they are turned into chocolate. Now, researchers have developed a system that will use the husks as feedstock to generate biofuel. The husks are processed into pellets, or bricks, that can burn in generators and produce “green” electricity. (inhabitat)

Do ‘mechanical trees’ offer the cure for climate change?

A Dublin-based company plans to erect “mechanical trees” in the United States that will suck carbon dioxide (CO2) from the air, it said on Monday, in what may prove to be biggest effort to remove the gas blamed for climate change from the atmosphere.
The company, Silicon Kingdom Holdings (SKH), will build 1,200 carbon-cleansing metal columns within a year with which it hopes to capture CO2 more cheaply than other methods, following a successful test in Arizona over a two-year period, it said.
While the high price of direct air capture has long been viewed as an impediment to scaling up the technologies, SKH’s costs is less than $100 per metric ton for pure CO2, it said. (thisisplace)

Have a great long weekend