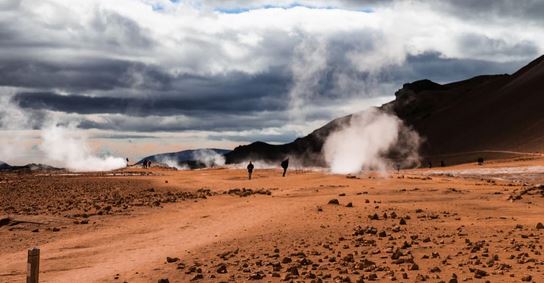 We have all heard that the recovery from the pandemic will be a great opportunity to “build back greener”. Governments all over the world have proclaimed this as a silver lining to the misery of the last 18 months, but which countries are actually delivering on this promise? This chart from the Oxford Global Recovery Institute paints an interesting picture: 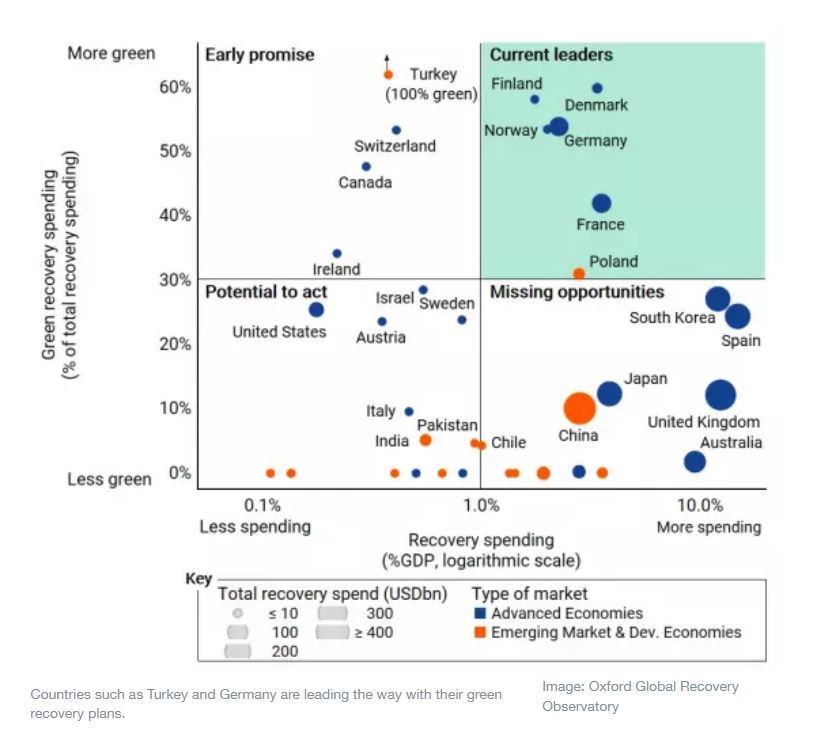 It may, or it may not, surprise you to find the UK in the “could do better” category

Octopus Renewables and Zestec in new partnership
Octopus Renewables has announced a new partnership with Zestec Asset Management to deliver more than £100 million of new build UK solar assets.
Funds managed by the specialist clean energy investor arm of the Octopus Group will be used to develop both rooftop solar and private wire ground-mount systems. Already, together the companies have over £10 million of contracted projects, and are continuing to build out their pipelines.
By partnering with the asset manager, Octopus Renewables aims to give landlords looking to utilise solar through the Power Purchase Agreement (PPA) model confidence that installations will be maintained throughout their life. (solarpowerportal)

Amazon launches inaugural sustainability bond, priced at $1bn
Announced late on Tuesday through a blog post on the Amazon website, the bond’s proceeds will be used to finance initiatives across five focus areas: renewable energy, clean transport, sustainable buildings, affordable housing and socio-economic empowerment.
The Climate Bonds Initiative has stated that the market for green, sustainability and social bonds is likely to pass the $1trn mark this year. (edie)

Worlds biggest biomethane filling station
Lorries will soon be able to fill their tanks with biomethane at what is claimed to be the world’s largest low carbon Heavy Goods Vehicle (HGV) refuelling station.
The new facility will open in Avonmouth, Bristol and will be capable of refuelling 80 HGVs an hour from 14 high-speed dispensers.
The project, which is being developed by refuelling infrastructure provider CNG Fuels, is designed to serve fleet operators with green aspirations.
The biomethane on the station is sourced from food waste – it is believed to be the lowest carbon alternative to diesel for HGVs reducing greenhouse gas emissions by up to 90%.
Brands that will use the station include  Warburtons, Farm Foods, Hermes and Wessex Water. (futurenetzero) 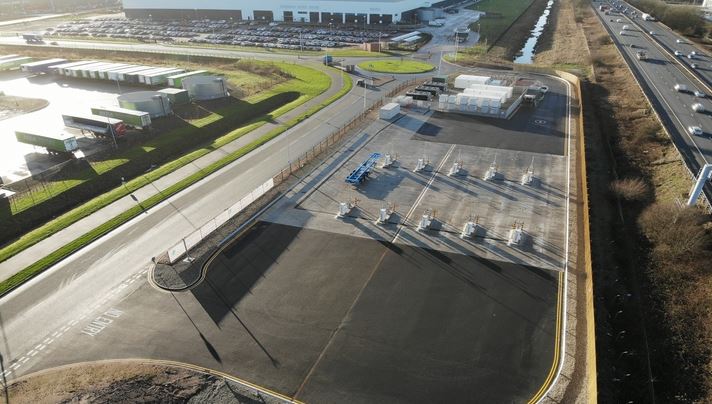 Taylor Wimpey targets nature net-gain under new sustainability strategy
Housebuilder Taylor Wimpey has published an updated environment strategy, with headline targets including science-based emissions reductions and a commitment to increase habitat at all new sites.
On climate, the firm has published new goals approved by the Science-Based Targets Initiative (SBTi) in line with the Paris Agreement’s 1.5C pathway.
To help deliver the target for operational emissions, Taylor Wimpey has committed to purchase 100% renewable electricity for all new sites and to increase the deployment of other low-carbon solutions during development, such as solar hybrid generators.
Nature is another key focus for the strategy. It details a commitment to increase natural habitat on all new development sites and to “add additional wildlife enhancements” where needed. These include bird and bat boxes, bug hotels, wildlife ponds and hedgehog pathways which the housebuilder is working with charities including Buglife, the British Hedgehog Preservation Society and the People’s Trust for Endangered Species to deliver. (edie)

UK should harness geothermal potential
The Association for Renewable Energy and Clean Technology (REA) and ARUP have published a wide-ranging new report exploring the environmental and economic potential of deep geothermal energy projects, drawing endorsements from over 30 businesses, academics, NGOs, and industry experts.
The report argues that the introduction of a targeted Geothermal Development Incentive by the government could result in up to 12 geothermal projects being operational by 2025. It calculates that a surge in development would create 1,300 jobs and generate more than £100m in investment, predominantly in towns in the North of England, Midlands, and South West. (businessgreen) 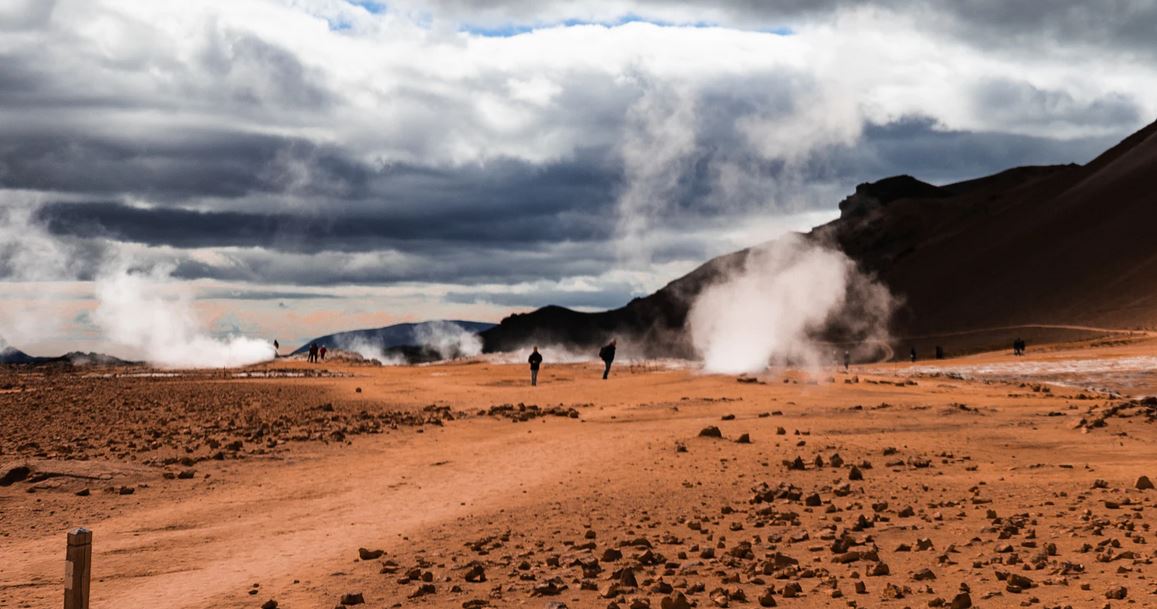 Beyond the Green Homes Grant failure
The Government has admitted that it did not consult stakeholders before launching the now-defunct Green Homes Grant scheme, in a document that MPs have said is evidence that it is shirking responsibility on domestic energy efficiency.
The document in question is the Government’s response to recent recommendations put forward by the Environmental Audit Committee (EAC), as part of its inquiry into the energy efficiency of existing homes.
Published this week, the response letter states that many of the concerns raised by the EAC, trade bodies and green groups will be addressed in the forthcoming Heat and Buildings Strategy. Separate Heat and Building Strategies had initially been due out in late 2020, but delays resulted from both the merger and ongoing Covid-19 pandemic.
While the letter expresses agreement with several of the concerns raised by the EAC, including worries of an unjust transition, in which businesses, homes and other energy users do not fairly share the costs and benefits of the net-zero transition, there is little in the way of adopting the EAC’s specific recommendations. (edie)
You can download the EAC report HERE

Is it a bike or is it a car?
Phoenix based Organic Transit raised their seed capital on Kickstarter and are now in full production making the ELF, an electrically enhanced quadricycle. The vehicle can travel nearly 50 miles on a charge, can be configured to two seats, as a last mile load carrier (up to 250kg payload) and can reach a20mpg on electric power or 30mpg with cycle assistance. Official estimates suggest it has a fuel efficiency of 1800mpg equivalent helped by the fact that each elf has 100w solar panel on the roof which can fully charge the vehicle in 7 hours.
To answer the question in the title, it qualifies as a bicycle so no need for a license and can go anywhere a bike can. 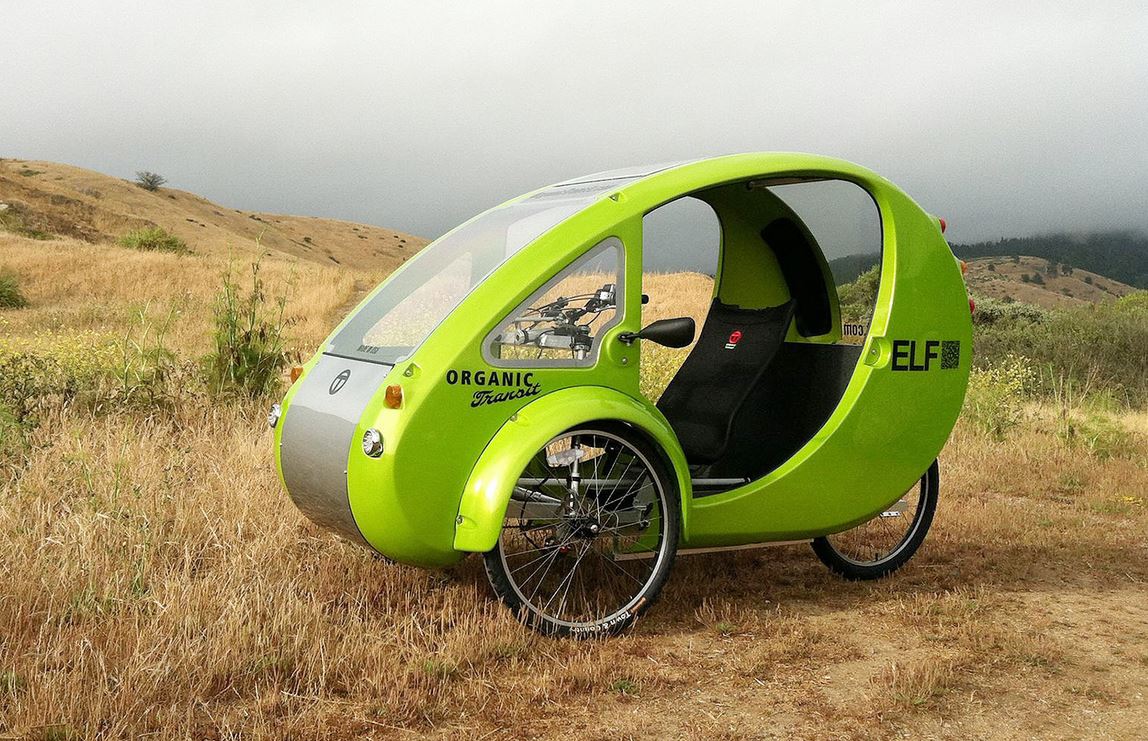 Equinor shows the way for oil majors to transition
Equinor (formerly Statoil) aims to become a net-zero carbon company by 2050. In other words, they are striving to supply energy with an overall net zero contribution of carbon to the atmosphere.
It would seem to make sense, with the world seeking to reduce the use of carbon-intensive energy sources, that oil companies would use today’s revenues to invest in lower-carbon energy sources, which will undoubtedly grow in importance in the decades ahead.
Although most of the integrated supermajors have been making some investments into renewables, none of them have reached the milestone Equinor reported this week when it released its earnings.
For the first quarter of 2021, Equinor reported after tax earnings of $2.66 billion. But an astounding $1.34 billion — right at 50% of the total — came from the company’s renewable segment. No other major oil and gas company has come close to meeting a measure like this. (energycentral)

Many of the biggest players in the UK solar energy industry have signed a statement supporting plans to develop a properly transparent supply chain for the industry. The statement was drafted by Solar Energy UK, who admit that there are challenges to creating such transparency in the short term.
Among the signatories are: Bluefield Partners, Lightsource BP and NextEnergy, Egni Co-op, Greencoat Capital, GRIDSERVE Sustainable Energy, Octopus Renewables, Centrica Business Solutions, JBM Solar, Joju Solar and Viridian Sola plus many others.

UK industry supply chain statement
The statement below has been developed in consultation with industry members as part of Solar Energy UK’s ongoing supply chain sustainability workstream.
“We, members of the UK solar energy industry, condemn and oppose any abuse of human rights, including forced labour, anywhere in the global supply chain. We support applying the highest possible levels of transparency and sustainability throughout the value chain, and commit to the development of an industry-led traceability protocol to help to ensure our supply chain is free of human rights abuses.” (solarenergyuk)

California grid hits record high of 95% renewable energy
California, one of the world’s largest economies and a pioneer of climate action and clean technology, generated 95% of its electricity demand from renewable energy sources for a brief time last month, according to the California Independent System Operator.
According to supply data from California Independent System Operator (ISO), renewable energy sources dominated California’s power supply throughout the day of Saturday, April 24, and just before 2.30pm local time reached a share of 95 per cent renewables as natural gas and imports plummeted.
California actually began exporting electricity to other states – and, according to Sammy Roth at the LA Times, this was due to a surge in solar generation. (renews)

Tesla Transitions To LFP Battery Cells For Megapack Installations
Multiple news sources are reporting that Tesla has begun using lithium-iron phosphate (LFP) battery cells in its Megapack grid-scale storage systems. LFP has some advantage and disadvantages when compared to the traditional nickel cobalt aluminum (NCA) or nickel, manganese, cobalt (NMC) batteries typically used to power electric cars. The advantages include not using nickel or cobalt, both of which are going up in price as the demand for electric cars accelerates. In addition, mining cobalt has significant environmental and humanitarian issues. Leaving those elements out helps lower the cost of manufacturing battery cells.
The downside is that LFP batteries are less energy dense than traditional battery cells. (cleantechnica) 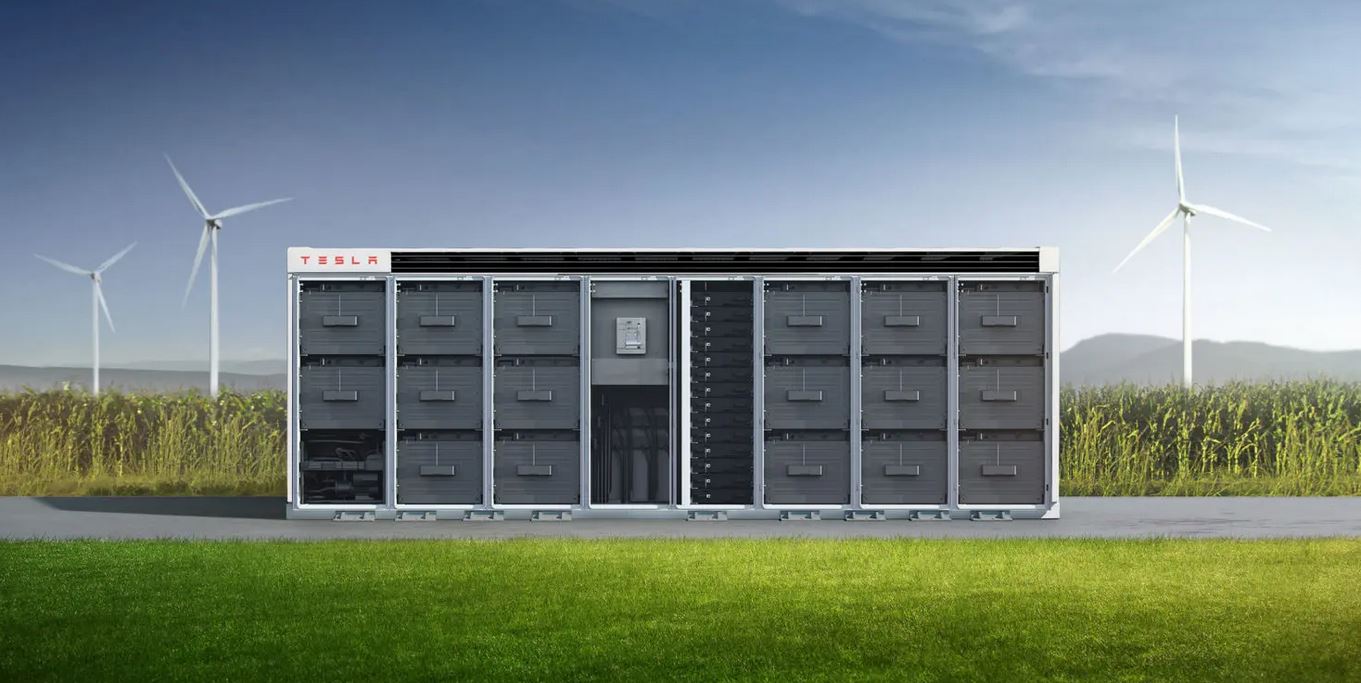 Innovative new hydrogen fuel cell technology nears debut
The first demonstrator vehicle for a novel new hydrogen fuel cell technology is in development by MAHLE Powertrain. As integration partner to hydrogen fuel cell specialist, Bramble Energy, MAHLE Powertrain is helping to optimize the integration of the company’s Printed Circuit Board Fuel Cell (PCBFC) technology within the powertrain of a Renault Kangoo ZE. The vehicle, which will be unveiled in 2021, will showcase the reduced-cost, high performance potential of high power density liquid cooled fuel cells.
MAHLE Powertrain was chosen to support Bramble Energy on the integration project, which leverages high volume printed circuit board manufacturing techniques to reduce cost and ease of production scalability, due to its expertise in EV control systems, zero-emission vehicle systems integration and cooling system development.
Utilization of PCB technology enables Bramble Energy to offer a bespoke fuel cell capability and enhanced production flexibility, plus a robustness inherent in the printed circuit board manufacturing process. It also enables the company to strip-back fuel cell complexity and reduce weight, negating the need for separate sealing materials and lowering the number of components without negatively impacting build quality or performance. (electrichybridvehicletechnology) 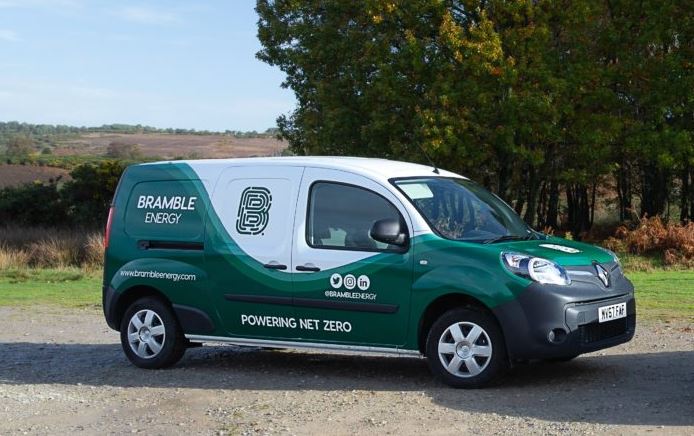