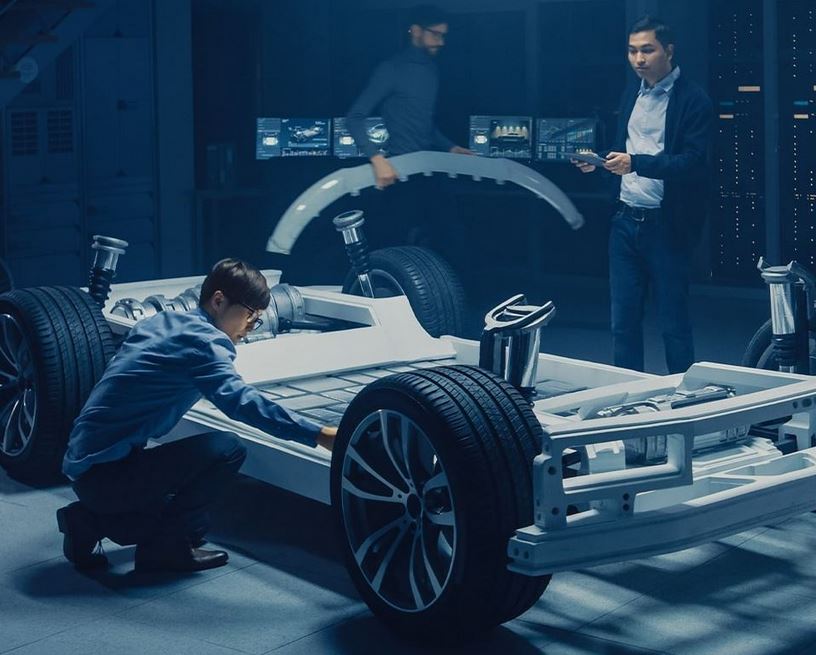 Glasgow’s Weir Group quits oil and gas industry
WEIR Group has sold its oil and gas division to Caterpillar in a deal worth more than £300 million, sending shares soaring in early trading.
The Glasgow engineering giant had put the operation, which has been hit heavily by the downturn in the US shale market, up for sale in February. It said the deal will see it become a “pure play” mining technology business, able to tap into growing trends in the global mining sector, including the transition to a low carbon society. (heraldscotland)

Tesla Purchases European Battery Assembly Company
ATS Automation Tooling Systems is a Canadian company that has fallen on hard economic times. In fact, it may be on the verge of filing for bankruptcy following a decline in business. recently. It owns a subsidiary in Germany called ATW Automation which specializes in assembling battery modules and battery packs for the automotive and transportation industry.
On September 25, Tesla agreed to acquire ATW Automation for an undisclosed sum according to Automotive News Europe. ATW Automation has about 120 employees and has completed more than 20 battery production lines for international automakers, says Automotive News.
This would fit with Tesla’s intention to vertically integrate towards the manufacture of battery modules and the timing looks cute as ATW’s skills will be usefully deployed in the building of the European Gigafactory. (cleantechnica)

Octopus Energy to create 1,000 new jobs
A U.K. clean energy company is seeking to create 1,000 jobs by the end of next year, expanding its technology to simplify the way consumers buy electricity.
Octopus Energy Ltd. said it wants to make the U.K. the “Silicon Valley of energy” and detailed a plan to expand its cloud-computing platform, known as Kraken, which aims to make it easier and cheaper for people to use renewable energy.
Last week four-year old Octopus Energy bought U.S. startup Evolve Energy as part of a $100 million push into the American market. Chief Executive Officer Greg Jackson said Octopus’s Kraken technology had the same potential as Apple’s App Store when it was first launched. (bloomberg)

Businesses pour £75m into Humber’s zero-carbon industrial cluster
A host of organisations have submitted a public and private sector bid of £75m to build key infrastructure to create the world’s first zero-carbon industrial cluster in the Humber region.
The £75m had been submitted on behalf of the Zero Carbon Humber (ZCH) Partnership, a group of 12 companies including British Steel, Drax, Uniper and Centrica Storage. The group is aiming to create the world’s first zero-carbon industrial cluster in the Humber region, at the request of the UK Government’s Industrial Clusters Mission.
The funding would be used for key pipeline infrastructure to transport stored and captured CO2. At Selby in North Yorkshire, for example, a Drax power station would connect to the network with bioenergy with carbon capture and storage (BECCS). The emissions technology forms a key part of Drax’s ambition to become carbon negative by 2030. The pipeline would also be connected to SSE Thermal’s Keadby site, which could make it the UK’s first gas-fired power station equipped with carbon capture technology by the mid-2020s. British Steel, one of the partnership members, would also benefit from the funding, enabling it to lower emissions.
Under the net-zero ambition, the UK Government has committed to fully decarbonising at least one industrial cluster by 2040. This has spurred a race between clusters in the North West, Teesside, Humberside, Grangemouth, South Wales and Southampton to become the first to do so.
BP, Eni, Equinor, Shell and Total have all signed up to spearhead the development of the Net-Zero Teesside project, which focuses heavily on the use of carbon capture, utilisation and storage technology (CCUS). (edie)

The Citroen ë-C4
The small electric SUV’s are coming thick and fast right now. Citroen release the electric version of the C4 which, under the skin, looks very similar to the Peugeot e-2008. 50kWh battery, up to 100kW of fast charging, 217 miles of range and a very customisable set of colour and trim options. Range looks a little light compared to the Hyundai Kona which comes in at a similar price. Peugeot-Citroen have clearly set out their stall that their electric cars are going to be built on the same platforms as their existing ranges in the assumption that customers do not want a differentiated electric product. It will be interesting to see whether this approach works. I have my doubts.

‘Intelligent’ electric vehicle battery launched
What is claimed to be the world’s first ‘intelligent’ electric vehicle battery was today launched by Slovakian EV battery producer, Inobat. Speaking at the GLOBSEC Tatra Summit 2020, the company’s CEO, Marian Bocek took to the stage with a physical prototype of the AI-built battery, which is said to have an higher energy density and an increase in operational range of 20% over current batteries. The announcement comes after only a year of research and development and its battery has been developed through a combination of Artificial Intelligence (AI) and High Throughput (HTP) technology.
InoBat’s technology-led approach to battery production enables it to create batteries more quickly and efficiently, while delivering an increase in operational range for current best-in-class electric vehicles of almost 20%.  This technology enables InoBat to reduce its dependence on cobalt, in addition to also boosting energy density to a goal of 330 Wh/kg and 1,000 Wh/L by the end of 2023. (theenergyst)

Are corporate PPAs the key to unlocking green energy?
Alongside battery storage that helps tackle the intermittency of solar and wind power generation, and more sophisticated networks that can deal with different levels of demand and supply, corporate power purchase agreements (PPAs) are seen as a key enabler of investment in renewables.
PPAs are suitable for different types of buyers. US tech companies led the way, but more recently a whole range of organisations including universities, transport firms and local authorities have shown an interest.
Physical PPAs that see the power going through the grid from the renewable energy facility to the buyer’s business site are not the only contracts on offer. An alternative model is a virtual PPA with a Contracts for Difference (CfD) arrangement, whereby there is physical delivery of guarantees of origin, not actual power.
For the buyer, a PPA allows to manage price risk, secure a long-term reliable source of renewable energy and underpin additional carbon generation. For the seller, it is a bankable offtake, a source of long-term revenue that enables project financing by replacing subsidies with corporate demand. (theenergyst)

Facebook accused of failing to tackle climate misinformation
Even though Facebook bans false advertising and has recently introduced new measures to tackle misinformation, 51 advertisements promoting climate denialism were posted by US-based users in the first half of 2020 and were viewed by millions of people.
That is according to new analysis from non-profit InfluenceMap, which works to assess the gaps between corporates’ environmental commitments and their actual impact and processes.
Using data from Facebook’s Ad Library, the analysis reveals that more than $42,000 was collectively spent by just nine US-based advertisers on climate misinformation campaigns between January and June. This money was used to fund 51 posts which were collectively viewed by more than eight million people.
Advertisers accused are PragerU; the Mackinac Centre for Public Policy; Texas Public Policy Foundation; Turning Point USA; the Capital Research Centre; Washington Policy Centre; the CO2 Coalition; the Clear Energy Alliance and the Competitive Enterprise Institute. (edie)

Climate crisis could turn the Amazon rainforest to savanna
A new study published in the journal Nature Communications indicates that the Amazon rainforest could shift from a closed canopy rainforest to an open savanna due to the climate crisis. The study shows that the rate of deforestation coupled with forest fires sparked by climate change could significantly change the status of the rainforest in the future.
According to the researchers, rainforests are very sensitive to changes in rainfall. If they experience prolonged droughts and fires like the ones recently witnessed in the Amazon, they may lose more trees and become more like a savanna. Although scientists have always known that this was possible, it was thought that such changes were decades away. The new study, led by the Stockholm Resilience Centre, now indicates that the changes are much closer than initially anticipated.
Almost 40% of the Amazon is already receiving less rainfall than usual and is at the point where it could exist as a savanna instead of a rainforest. While the researchers say that the process of fully changing the forest to savanna would take decades, they also say that once the process starts, it is nearly irreversible. (inhabitat)

Saudi Aramco ships blue ammonia to Japan for zero-carbon power
Saudi Aramco and the Institute of Energy Economics, Japan have sent the world’s first shipment of blue ammonia to Japan.
The bodies collaborated with SABIC to arrange the shipment from Saudi Arabia. The project intends to demonstrate the value-chain steps needed for zero-carbon power generation.
Ammonia consists of three parts hydrogen and one part nitrogen, and several companies view it as a method to transport hydrogen using existing infrastructure. Its ‘blue’ colour indicates manufacturers used blue hydrogen to make it.
Approximately 30t of CO2 captured during the process has been designated for use in methanol production at SABIC’s Ibn-Sina facility. (power-technology)

Launch of the US Hydrogen Economy Roadmap
Here are the 12 key points from the Roadmap launched this week:
1) Employment and economic growth
2) Grid balancing and storage
3) Transport including Busses, HGV’s and rail
4) Residential and commercial fuel
5) Hydrogen is already used for example as already a feedstock for ammonia
6) Aviation fuel feedstock
7) Can help as a reducing gas metal and cement industries
8) Currently hydrogen is mostly used in refining process
9) Steam reforming to green trajectory
10) The US Pathway is technology agnostic report, so long as hydrogen production is sustainable
11) Long term storage is geographically well placed and often near to hydrogen for ammonia sites making it very amenable
12) 14 % of US energy requirement will be met if roadmap followed  (energycentral)
Download the full report HERE

New Super-Enzyme Can Break Down Plastic at Rapid Pace
The super-enzyme was engineered by linking two separate enzymes, both of which were found in the plastic-eating bug discovered at a Japanese waste site in 2016. The researchers revealed an engineered version of the first enzyme in 2018, which started breaking down the plastic in a few days. But the super-enzyme gets to work six times faster.
The 2018 work had determined that the structure of one enzyme, called PETase, can attack the hard, crystalline surface of plastic bottles. They found, by accident, that one mutant version worked 20 percent faster. The new study analyzed a second enzyme also found in the Japanese bacteria that doubles the speed of the breakdown of the chemical groups liberated by the first enzyme.
Bacteria that break down natural polymers like cellulose have evolved this twin approach over millions of years. The scientists thought by connecting the two enzymes together, it might increase the speed of degradation, and enable them to work more closely together. (yale360)