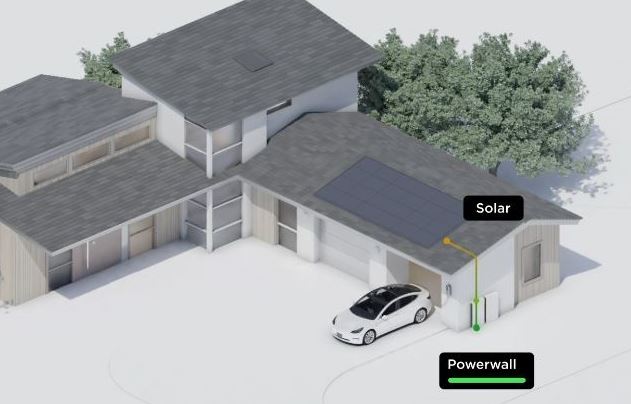 We may be near the end of the curve of falling costs for wind, maybe also solar, but as both are now competitive with the marginal cost of gas, nuclear and coal we are going to have to afind something else to argue about

Tesla launches UK-based virtual power plant project
Tesla has opened its Energy Plan to UK residents with electric vehicles (EVs), encouraging them to install domestic solar generation and batteries to provide flexible energy services to the grid.
It is rolling out the Plan as part of a partnership with Octopus Energy, which has 1.4 million customers in the UK. The Plan is designed to help homes transition to 100% renewable energy. This is provided by a mixture of onsite solar generation – with panel installation and maintenance offered at a reduced cost – and through tariffs.
Once the transition to renewable power is complete, homeowners are encouraged to use their EV or to purchase a small battery storage unit to provide flexibility services. ‘Smart’ technologies enable the battery or vehicle to charge during times of low demand and when the carbon intensity of the grid mix is high, and to discharge when demand peaks. This method purports to reduce bills while helping to secure energy supplies as the grid mix decarbonises.
Tesla and Octopus Energy claim that the Plan can reduce annual electricity bills by up to 75%. It has a flat import rate of 8p per kWh for Tesla owners and 11p per kWh for other customers. (edie)

BP leads two major UK carbon capture projects
BP has set out plans to lead an alliance of energy companies in siphoning off the carbon dioxide from factory flues under new plans in which almost half the UK’s industrial emissions will be stored beneath the North Sea from 2026.
The veteran North Sea oil extractor is leading a partnership including Italy’s state oil company Eni, Norway’s Equinor, National Grid, Royal Dutch Shell and French energy company Total in a plan to transport 17m tonnes of carbon dioxide every year from two separate carbon capture projects based in the Teesside and Humber industrial clusters on England’s east coast.
At Teesside, BP will work with the same oil companies, in a separate venture, to capture up to 10m tonnes of carbon dioxide a year from the industrial cluster – equivalent to the same emissions produced from the energy used by 3m UK homes – from the mid-2020s.
Meanwhile, at the Humber a separate alliance including National Grid, Equinor and power generator Drax hopes to capture at least 17m tonnes of CO2 from hundreds of refineries and factories.
Carbon capture and storage is considered vital to the UK’s legally binding target to create a carbon neutral economy by 2050. It would also be “virtually impossible” for the world to meet its climate targets without it, according to the International Energy Agency. (guardian)

London’s Mayor to offer Heavy Vehicle Scrappage
Mayor Sadiq Khan’s scrappage scheme will help small businesses and charities that are doing their part in cleaning up the air to overcome remaining challenges.
Cleaning up London’s air is crucial to protecting the public especially in light of the pandemic. Air pollution has been linked to more severe cases of COVID-19.
The scheme will give out grants of £15,000 to scrap a heavy vehicle and replace it with a compliant vehicle or to retrofit diesel vehicles up to the class’s Euro VI standards. Several organizations have already pre-registered — over 100 — and the scheme will operate on a first-come, first-served basis. (cleantechnica)

Environment Bill amendments cause concern
Proposed amendments to the Environment Bill have sparked concerns around green campaign groups, who claim they could delay the introduction of the UK’s post-Brexit watchdog and weaken its powers.
Environment Minister Rebecca Pow has tabled the proposed amendments, which were published this week and will be voted on when the Bill returns to Parliament. This is expected to happen in November.
One amendment would give senior representatives of the Department for Food, the Environment and Rural Affairs (Defra) the power to guide the Office for Environmental Protection’s (OEP) remit and processes for enforcing punishment on actors who fail to comply with green laws. This power covers the ways in which the OEP would deal with public sector bodies – including Government departments.
This is being sold as a way to fast track the Bill which has suffered multiple delays, but environmental groups such as Greener UK and the Green Party complain that it will effectively allow the Government to tell the OEP what to do. (edie)

GMC reveal an electric Hummer
Rather like its most famous Terminator/owner the Hummer is performing a fine poacher-turned-gamekeeper act.
The Hummer brand was built out of the military Humvee platform and became a byword for fossil fuel excess. The forthcoming Hummer EV maintains much of the styling of the original while replacing the monstrous drivetrain with an equally awe inspiring electric equivalent. GMC have not announced the size of the battery pack but are talking about a torque figure of over 1,000lb ft, a 0-60 time of 3 seconds and a range of 350 miles.
The car will have three electric motors and feature GM’s new Ultium Drive electric powertrain, whatever that is.
Al Oppenheiser the chief engineer on the programme described the car as “an absolute off-road beast”. Sounds fair.

Frankfurt breaks ground on first fuel station for hydrogen trains
The German public transport network Rhein-Main-Verkehrsverbund (RMV) has announced it has begun the construction of a filling station that will supply what claims to be the ‘world’s largest’ fleet of hydrogen trains.
The €500 million project will be the first hydrogen fuel station for passenger trains in Hessen, Germany, and the second worldwide.
The filling station will start supplying hydrogen to the trains from December 2022.
The French manufacturer Alstom will deliver 27 hydrogen-powered fuel cell trains by mid-2022, which will have a range of up to 1,000 kilometres and can run for a whole day. (energylivenews)

Costs still falling
Lazard produce the authoritative guide to energy costs when they publish their annual Levelised Cost of Energy (LCOE) report which for the last few years has been joined by a Levelised Cost of Storage (LCOS) report.
The conclusions this year continue the trends of the last few years: The cost of utility scale solar and onshore wind comfortably undercut those of any other newbuild technology. Add in any kind of subsidy or tax credit and these two will undercut even the marginal cost of the cheapest fossil fuel energy.
The rate of cost decline in wind has slowed but solar is still showing double digit percentage declines. An interesting addition to the series this year is hydrogen costings: Lazards estimate the cost of Blue hydrogen at $88 per MWh and Green Hydrogen at $127 per MWh. A blend of natural gas with 20% hydrogen would currently cost between $5.20 and $10.05 per British therm as against gas at $3.45 per therm.
The LCOS study sees ongoing cost reductions especially at the short duration end, which tallies with the continued rapid cost reductions in Lithium-ion battery technology.
Access the both reports HERE

Greenhouse-inspired home harvests rainwater
In the idyllic town of San Miniato in the region of Tuscany, Italy, local architecture firm LDA.iMdA architetti associati has completed a multifunctional home that takes inspiration from the structural technology in greenhouses. The client’s dream of growing a vegetable garden served as a major design influence for the contemporary dwelling, which features a gabled shape optimized for harvesting rainwater that can be reused for irrigating the expansive rear garden. The project, dubbed La casa nell’orto (or House in the Orchard), also incorporates eco-friendly materials such as prefabricated wood self-supporting panels and is elevated off the ground to reduce the impact on the landscape. (inhabitat)

‘Old and unsafe’ cars sent to developing world
Millions of used motor vehicles exported from the US, Europe and Japan to developing countries are of poor quality and are contributing significantly to air pollution, according a new UN report.
About 80% of the 14m used light-duty vehicles – saloon cars, SUVs and minibuses – exported between 2015 and 2018 went to low and middle-income countries. About 40% went to Africa, found the report, published by the UN Environment Programme (Unep).
But the age and poor quality of the vehicles is hindering efforts to mitigate the climate crisis, said the report. Vehicles are a huge contributor to air pollution and climate breakdown. Globally, the transport sector is responsible for nearly a quarter of energy-related greenhouse gas emissions. (guardian)

3 Tidal Turbines  Pop Into New York City’s East River
Marine energy company Verdant Power has plopped three tidal power turbines into New York City’s East River on one array. This is a demonstrator project called the Roosevelt Island Tidal Energy (RITE) Project, and it is indeed the first US-licensed tidal power project.
Verdant Power is based in New York. Hence its first deployment being in NYC’s East River. The RITE pilot project got the first tidal power project license from the US Federal Energy Regulatory Commission (FERC). The project also received support from the New York State Energy Research and Development Authority (NYSERDA) and the US Department of Energy (DOE) plus backing from private equity.
The electricity from this project will go to Roosevelt Island “through a distributed generation connection to Con Edison’s local grid.” (cleantechnica)