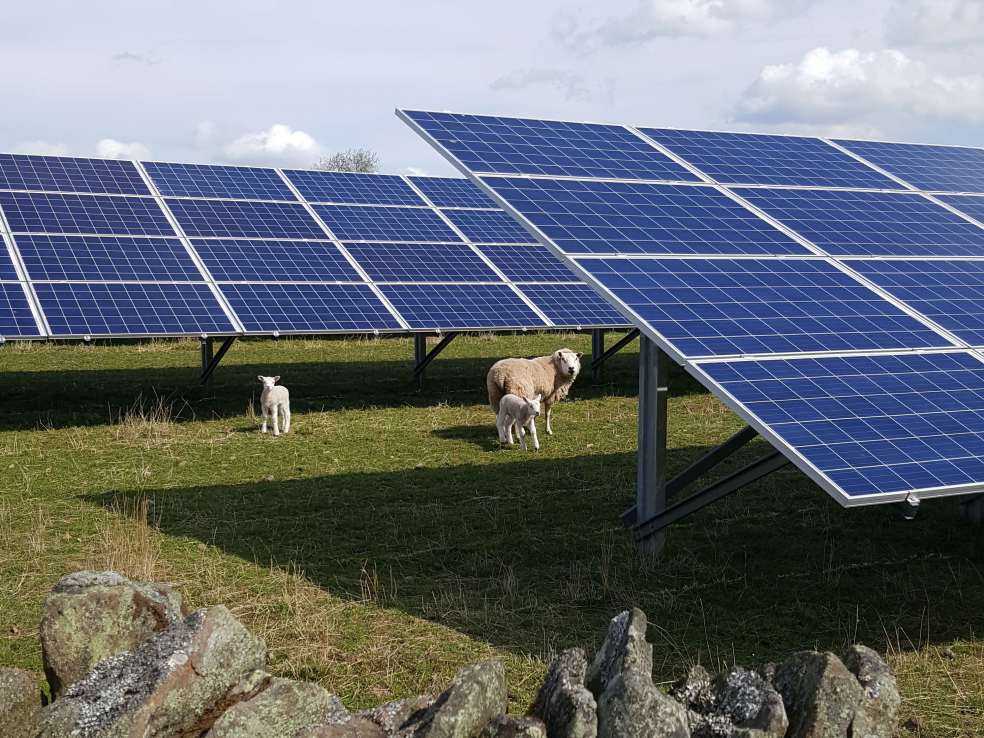 A couple of readers last week spotted that the link to the best heat pumps review was missing. Apologies, you can find the article HERE

Macquarie takes stake in Island Green Power
Macquarie Asset Management has reached an agreement to acquire a 50% stake in UK renewables developer Island Green Power.
The investment, via the Macquarie Green Investment Group Renewable Energy Fund 2 (MGREF2), will enable the asset manager to expand its European solar presence.
Concurrently with the main transaction, Macquarie Asset Management has also agreed to acquire a stake in a ready-to-build 65MW solar project located in Suffolk, UK, from Island Green Power.
The project, which includes the potential for 50MW of battery storage, closely aligns with MGREF2’s mandate to develop, construct, and operate renewable energy projects over the long-term.
The deal is expected to reach completion by the end of the second quarter of 2022. (renews)

UK readies undersea electricity ‘superhighways’
Ofgem has recognised the “clear case” and the “consumer benefit” of the Scotland to England Green Links.
The two subsea links will have a capacity of up to 4GW. The first 2GW link is a partnership between National Grid Electricity Transmission (NGET) and SP Energy Networks and will run from Torness, Scotland to the Hawthorn Pit Substation in Durham County, England with approximately 176 kilometres of offshore cable.
The second 2GW link, a partnership between NGET and SSEN Transmission, will originate from Peterhead in Aberdeenshire, Scotland, and terminate at Drax in North Yorkshire, England with 440 kilometres of cable running undersea.
They are believed to be the largest electricity transmission investment projects in Britain’s recent history (energylivenews)

Triodos launches £4.7m community renewable energy bond offer
Triodos Bank UK is launching a £4.7 million community renewable energy bond offer through its crowdfunding platform for Empower Community Foundation, which owns two solar farms.
The two 5MW solar farms owned by Empower Community Foundation are located near Salibsury in England and Arbroath in Scotland. Both were completed in 2016.
The two farms were originally brought into community ownership using bridging loans to fund the transaction, with the majority of this having been refinanced using a secured long-term loan from Triodos Bank UK.
The crowdfunding bond will repay the remainder of the loan and secure long-term funding for the remaining life of the solar farms. (solarpowerportal)

National Grid partners with UK universities for innovative net zero projects
National Grid Electricity Transmission (NGET) has announced new partnerships with six universities to accelerate its plan to decarbonise Britain’s electricity system.
The partnerships will help to develop and deliver projects in the fields of electricity transmission network asset design, power system simulation and digitalisation of power system.
NGET will work with researchers from Cardiff, Edinburgh, Exeter, Manchester, Southampton and Strathclyde Universities during the five-year period of the RIIO-2 price control from 2021 to 2026. (energylivenews)

England’s largest seagrass restoration project sees 3.5 hectares planted
The largest seagrass restoration project in England has planted 70,000 bags of seed, which will provide 3.5 million hectares of seabed for marine wildlife.
The £2.5 million project has been led by Natural England since July 2019 to restore habitats around the country that are at high risk.
Since 1936, the UK has lost around 44% of its seagrass from pollution, anchoring and mooring of boats.
Seagrass has also been found to be as useful at absorbing and storing carbon as woodlands – simultaneously providing habitats for wildlife and capturing carbon emissions to fight climate change. (futurenetzero)

Lotus shows off electric “hyper-SUV”
Lotus are owned by Geely who also own Volvo and Polestar amongst others. Whilst they have been involved in technical work around EV’s the nearest they had come to an actual car was that a Lotus was used as the template for the original Tesla sports car from which all  things Tesla grew.
Now Lotus announce their own entry into the increasingly crowded electric SUV field. Their car is called the Eletre and describe it as a hyper-SUV. It is a big car, longer than a Range Rover. It will be fast, obviously, should handle well and promises over 300mile range using a battery of at least 100kWh. A lot of work has been done on aerodynamics and weight, Lotus are good at trimming weight off their cars. The company promise that a sports car is to follow.

EU sets out vision to place ecodesign requirements on almost all products
The European Commission has this this week published a sweeping package of measures designed to create a more circular economy across the bloc, arguing the rules will provide a boost to green businesses and help incentivise the development, purchase, and sale of more sustainable products across the continent.
The expansive package consists of a new Sustainable Products Initiative, which includes a plan to expand the EU’s existing ecodesign scheme to cover a broader range of products, while requiring manufacturers to meet new criteria to improve circularity, enhance energy efficiency, and reduce environmental and climate footprints.
The Commission has also unveiled a new Sustainable and Circular Textile strategy, which is designed to tackle the environmental impact of ‘fast fashion’ by making textiles more durable, repairable, reusable, and recyclable.
In addition, Brussels confirmed it intends to update existing Construction Products Regulations to establish new design and manufacture requirements for construction goods manufacturers that would ensure goods are more durable, repairable, recyclable, and easy to re-manufacture.
The final pillar of the EU’s new Circular Economy package is a proposal to strengthen consumer protections against untrustworthy or false environmental claims, which aims to effcetively ban practices that mislead consumers about the durability of a product. Under the proposals, consumers will have a legal right to know how long a product is designed to last for and how and if it can be repaired. (businessgreen)

Siemens Energy to produce electrolysers in Berlin
Siemens Energy will locate its industrial electrolyser factory in Berlin with production start-up slated for 2023.
The multi-gigawatt capacity factory is located in Huttenstrasse in Berlin’s Moabit locality.
New production lines for the electrolysers are being set up in an area of 2000 square metres at an investment cost of around €30m.
Today, the site mainly manufactures gas turbines, which can already be operated with up to 50% hydrogen.
By 2030 complete hydrogen operation should be possible. (renews)

Amasus Shipping picks bound4blue to install wind assist on vessel
Netherlands based short sea shipping company Amasus Shipping is the latest shipping company to announce plans to use wind assist technology as part of its plans to reduce CO2 emissions and fuel bills.
The short sea ro-ro and general cargo vessel operator has signed a deal with Spanish wind assist company bound4blue to install the technology company’s suction sail, or eSail, on a 2,850dwt vessel EEMS Traveller.
The agreement is for a pair of 17-meter high structures to be retrofitted on the 91 metre vessel later this year.
Bound4blue claim the two tower like structures could produce enough thrust from the wind for EEMS Traveller to see emissions savings of up to 30% when sailing under optimal conditions. (fathomworld)

The faster you build the cheaper it gets
This is taken from Azeem Azhar’s Exponential View newsletter:
“Learning curves – making things cheaper as we learn how to build them better – are the heart of the Exponential Age. This creates a fascinating flywheel. The faster you move to a new technology, the more rapidly that technology gets cheaper.
This has ramifications for the renewable transition, Auke Hoekstra points out in this Twitter thread (HERE). The idea is to spend now and increase the rate at which these renewable technologies decline in price, which in turn creates the economic incentives to switch to renewables, which further drives down the cost curve. Auke built a simple model which shows why a fast transition more rapidly reduces end user electricity costs.”

IRENA World Energy Transitions Report 2022 sends strong message
According to the report, keeping the world on a 1.5C pathway will require ensuring that renewables account for at least 40% of the global annual energy mix in 2030, up from 14% at present. This shift could be delivered by a “resolute” phase-out of coal, compounded by rapid expansion of wind, solar and sustainably-sourced biomass. Unabated coal generation would end globally by 2030.
Electrification will also need to happen at scale to tackle energy consumption – the Outlook is predicated on the global electric vehicle (EV) stock being 20 times larger in 2030 than it was in 2021. Also detailed is the widespread uptake of electric technologies for domestic heating. (edie)
Download the report HERE

E.ON and Fortescue strike hydrogen deal
Energy group E.ON and metals company Fortescue have signed an agreement to replace Russian gas with Australian green hydrogen in Germany.
Chair of Fortescue Andrew Forrest has committed to exporting enough green hydrogen to Germany to compensate for a third of its gas imports from Russia.
He estimates the plan will cost around $50 billion (£38bn) to implement; producing and exporting five million tonnes of hydrogen to E.ON.
The amount of renewable infrastructure required to create this amount of hydrogen is projected to be enough to power land mass the size of the UK.
This green hydrogen will be produced using the process of renewable electrolysis, rather than natural gas.
There are still queries as to how this amount of hydrogen could be successfully transported intercontinentally, with Fortescue having already agreed billions of dollars’ worth of supply deals it is yet to realise. (futurenetzero)

Permian Basin is leaking far more methane than previously thought
One of the largest and fastest-growing oil production sites in the US is emitting far more methane than previously measured. It’s well known that oil and natural-gas production is a significant source of the powerful greenhouse gas: methane that is trapped underground leaks out from wells and pipelines, and it can also be released intentionally through venting and flaring, or burning. But an aerial survey of the Permian Basin in New Mexico revealed more leakage than even the highest estimates had suggested to date.
The airplane taking measurements was able to cover about 100 times more sites than previous ground surveys. By flying over active wells and pipelines in the New Mexico section of the basin, the plane detected 1,985 methane plumes over the course of 15 months.
In addition to discovering higher levels of methane leakage than expected, the survey also identified a few mega-emitting sites. Just about 5% of the plumes that the plane detected were responsible for over half the measured emissions. (cleantechnica)

Super thin solar panels could be the answer to a greener future
Wafer-thin solar panels have been made 25% more energy absorbent, which could signal a large step forward for the renewables sector.
University of Surrey and Imperial College London researchers have managed to increase the solar power of the panels, which are just one micrometre thick.
The size of the panels could mean less materials are needed to build solar infrastructures, lowering the waste and carbon emissions from the manufacturing process without compromising on utility.
Researchers used a honeycomb layer design on top of a wafer of silicon on the panel, which enables light absorption from any angle and traps light inside the cell.
Recent tests produced a 25% increase in absorption rates from those set in 2017, with an efficiency rating of 21%, which the analysts believe could be increased with further testing. (futurenetzero)