Good to see that the Electric Highway has been put out of its misery. A prime example of how being the first into a market does not guarantee that you are a winner

Drax and Mitsubishi Heavy Industries sign negative emissions project deal
Drax Group and Mitsubishi Heavy Industries Engineering, part of Mitsubishi Heavy Industries (MHI) Group, have agreed a long-term contract for Drax to use its carbon capture technology, the Advanced KM CDR process, in what would be the largest deployment of negative emissions in power generation in the world.
The contract will see Drax license MHI’s unique carbon capture solvent, KS-21, to capture CO2 at its power station near Selby, North Yorkshire.
Drax is already the largest decarbonisation project in Europe, having converted its power station to use sustainable biomass instead of coal, reducing its emissions by more than 85%. By deploying BECCS technology, Drax aims to go further – becoming carbon negative by 2030. The first BECCS unit at Drax could be operational by 2027, supporting thousands of jobs across the North of England as soon as 2024, and capturing and storing at least 8 million tonnes of CO2 a year by 2030. (theenergyst)

Ørsted to inject £40bn into green energy by 2027
Danish energy giant Ørsted has announced it will spend an estimated £40.5bn on green energy by 2027.
The company has also updated its installed renewable energy capacity target to reach 50GW by 2030.
Of this capacity, the firm estimates 30GW will come from offshore wind, 17.5 GW from onshore wind and solar photovoltaics and approximately 2.5GW from other renewables, including sustainable biomass and renewable hydrogen.
That means it will more than quadruple its installed capacity over the next decade. (energylivenews)

Scottish firm scores major offshore wind export contract in Taiwan
Scottish offshore construction grouting specialists FoundOcean has won a major new export contract to provide the foundations for an offshore wind farm in Taiwan.
International Trade Minister Graham Stuart made the announcement for the contract, which was secured following financial support from UK Export Finance (UKEF), the government’s export credit agency.
FoundOcean will provide the foundation grouting for a 100-turbine offshore wind farm, which will enable the turbines to be secured to the seabed to form the wind farm.
The wind farm will be able to produce more than 1GW of renewable electricity – equivalent to 20% of the level produced by the UK – as well as create 30 new jobs in the local area. (energylivenews) 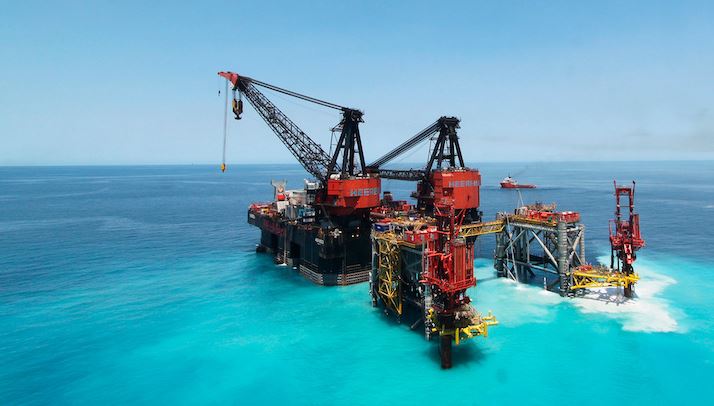 Gridserve buys rest of Electric Highway
Ecotricity has today confirmed the sale of Electric Highway – a charging network for EVs, to Gridserve. The sale will enable Ecotricity to focus on its core green energy business.
The Electric Highway began a decade ago, in this time charging has leapt from 3-pin plugs and 7kW charging to the current 350kW, capable of providing 100 miles of charge in around 5 minutes, while typical car range has increased from 80 miles to over 300.
Gridserve are ramping up investment in the Electric Highway with the replacement of all the existing chargers on the network with new technology that features all the latest advances including contactless payment – and the opening last month of the first high power charging facility at Moto’s new flagship Motorway services at Rugby, featuring 12 x 350kW chargers. (theenergyst)

David Beckham invests in EV specialist
David Beckham has taken a 10% stake in Silverstone-based Lunaz Design, a company that converts classic cars to electric using a modular electric powertrain that it designs, engineers and manufactures.
The former Manchester United and England footballer is joined as an investor by the Reuben and Barclay families and Alexander Dellal.
Founding investors Navid Mirtorabi and CJ Jones are both entrepreneurs and investors in clean-tech startups.
Through his investment arm, Beckham has already backed start-ups in sectors such as eSports and athletic recovery products.
Lunaz is currently producing EV versions of classic cars including Rolls-Royce, Range Rover and Jaguar sportscars.
Following the latest injection of capital Lunaz has announced plans to grow its offering to the upcycling and electrification of industrial vehicles on a mass global scale. (theenergyst)

Glasgow depot to become charging hub for 300 buses
Glasgow is to be the site of a charging hub that will eventually accommodate up to 300 buses, First Bus has announced. The company said it will transform its Glasgow Caledonia bus depot into the UK’s largest electric vehicle charging hub, as it delivers plans for a 100% zero-emission fleet by 2035.
The first phase of the project, now under way and expected to be complete by September this year, will see 11 dual DC rapid charging units installed, allowing for the introduction of a further 22 electric buses ahead of COP26.
A further 69 units will be installed from this summer (Phase Two), bringing the number of chargers on the site to 162. At that time, the depot will have the capability to charge 89% of the depot’s electric bus fleet at the same time using smart charging software, which will also minimise charging at peak times. (newpower)

Daymark Spiritus – An EV that mines crypto
Daymark Avenir is a Canadian business that has developed a range of electric mobility solutions from e-bikes to off-road buggies, mobility scooters and even a flying saucer!
The Spiritus is a high performance 3 wheel, 2 seater commuter vehicle with 180 mile range that will guarantee to get you get noticed on the way to work. It is quite affordable at £11,000 although there is a high performance variant that will do 0-60mph in 1.8 seconds for seven times the price.
If wild looks and super performance were not enough it is also specified with software that allows it to mine crypto currencies in its spare time.
Daymark announced this week that they will start taking orders for 2023 delivery. Form an orderly queue. (daymnark)

HeidelbergCement plans world’s first CO2 neutral cement plant
HeidelbergCement the world’s second-largest cement maker, on Wednesday said it plans to turn its Swedish factory in Slite into the world’s first CO2-neutral cement plant by 2030 via carbon capture technology.Following the planned retrofit, which will cost at least 100 million euros, the plant will be able to capture up to 1.8 million tonnes of carbon dioxide per year, which corresponds to the site’s total emissions. (reuters)

Michelin solution could bring inflatable sails to oil tankers
Michelin, the company best known for making tires has presented the latest version of an inflatable wing sail system that could help decarbonize oil tankers, vehicle carriers, and other sea freight, as well as some pleasure craft.
Called Wing Sail Mobility (WISAMO), the project is a collaborative venture between Michelin Research & Development and two Swiss inventors of the concept. It uses an inflatable sail and telescopic mast to harness the wind, boosting a ship’s fuel efficiency by up to 20%.
One large cargo ship can emit as much as 50 million cars. Global shipping adds up to nearly 3% of global carbon dioxide emissions, and about 90% of the world’s freight is transported via the sea, so it could have a significant impact in long-term goals to decarbonize shipping. (greencarreports)

Corre Energy gets Italian funding for innovative storage solution
An Italian equity fund which counts the European Investment Bank among its institutional investors has said it will invest up to €20 million in a startup which combines green hydrogen production and compressed air energy storage.
Technology provider Corre Energy said yesterday that it has signed a long-term equity-linked funding agreement with energy transition infrastructure investment group Fondo Italiano per I’Efficienza Energetica (FIEE). FIEE will invest through its Italian Energy Efficiency Fund II vehicle with the funds to be used towards the strategic development of Corre Energy.
Corre Energy wants to use large underground salt caverns across Europe to store energy in the form of air compressed using hydrogen generated by renewable energy sources. The company is leading a consortium to build a green hydrogen hub in Denmark, and has applied to the EU Innovation Fund, while another project it is developing in the north-east Netherlands has secured co-financing from the European Union’s Connecting Europe Facility for infrastructure investment as well as being declared an approved Project of Common Interest. (energy-storagenews)

World’s soils ‘under great pressure’
The world’s soils, which provide 95% of humanity’s food, are “under great pressure”, according to a UN report on soil pollution.
Soils are also the largest active store of carbon, after the oceans, and therefore crucial in fighting the climate crisis. But the report said industrial pollution, mining, farming and poor waste management are poisoning soils, with the “polluter pays” principle absent in many countries.
Pollutants include metals, cyanides, DDT and other pesticides, and long-lasting organic chemicals such as PCBs, the report said, making food and water unsafe, cutting the productivity of fields and harming wildlife. However, it said most releases of pollutants that end up in soils are not easily quantified and therefore the true damage remains highly uncertain. (guardian)
Download a summary of the report HERE

G7 leaders depicted in Mount Recyclemore e-waste sculpture
The G7 leaders may or may not be talking a load of rubbish in Cornwall this weekend, but their meeting inspired a couple of artists to put together this impressive sculpture entirely made out of electronics waste.
Joe Rush, who masterminded the installation is renowned for his environmental art installations and has worked with many notables such as Banksy and Damien Hirst. He was assisted in the creation of Mount Recyclemore by tech business musicMagpie and someone called Alex Wreckage. (guardian)

Scientists have cost-effectively harvested lithium from seawater
Researchers at King Abdullah University of Science and Technology (KAUST) in Saudi Arabia have figured out how to extract lithium, an essential part of electric vehicle batteries, from seawater in a more cost-effective way.
The KAUST team solved this problem with an electrochemical cell containing a ceramic membrane made from lithium lanthanum titanium oxide (LLTO). Its crystal structure contains holes just wide enough to let lithium ions pass through while blocking larger metal ions.
The cell contains three compartments. Seawater flows into a central feed chamber, where positive lithium ions pass through the LLTO membrane into a side compartment that contains a buffer solution and a copper cathode coated with platinum and ruthenium. Meanwhile, negative ions exit the feed chamber through a standard anion exchange membrane, passing into a third compartment containing a sodium chloride solution and a platinum-ruthenium anode. (elektrek)
The report can be viewed HERE