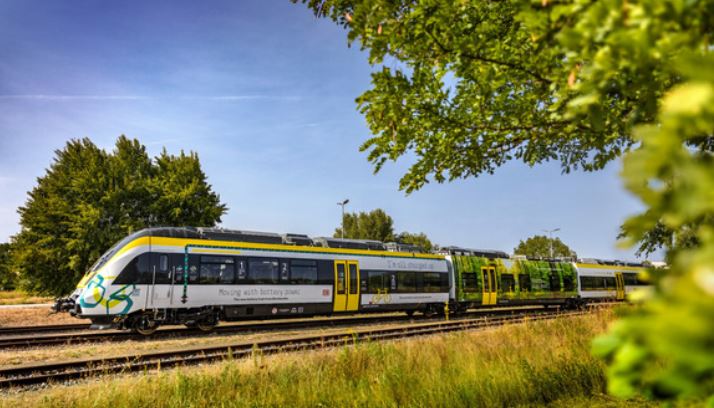 I am not sure that it really shone through at the party conference last week, but there was a pleasantly surprising level of support for green policies

Bombardier Transportation, the rail division of transport giant Bombardier, has today announced a new €100m five-year partnership with Swiss battery maker Leclanché that is set to see the first battery-powered trains hit UK tracks.
Following an 18-month testing period, the two firms have signed a Memorandum of Understanding (MoU) which will see Leclanché supply its lithium-ion batteries to Bombardier for use across its train portfolio, including in the UK
The deal will help shift Bombardier away from using lead-acid batteries and diesel to cleaner, more efficient lithium-ion cells.
It also boosts the UK’s chances of meeting a ministerial target to phase out diesel trains by 2040 without the expense of electrifying the entire rail network, where electric upgrade cost around €500,000 per kilometre of track. (businessgreen)

Low-carbon greenhouses to grow 20 tonnes of tomatoes a day

One of the UK’s largest clean energy funds has revealed plans to invest £120m in a pair of low-carbon greenhouses in Norfolk and Suffolk, large enough to grow 10% of the UK’s homegrown tomato crop.
The giant greenhouses, each one and a half times the size of the O2 in London, will be used to grow up to 20 tonnes of tomatoes a day using the heat from Anglian Water’s water treatment facilities.
The 7-metre tall glass structures will allow crops to grow vertically along guide wires. They will grown hydroponically from nutrient-rich water solutions instead of using soil.
The scheme will require the UK’s largest heat pumps, which will channel heat from warm water into the greenhouses to help speed the growth of the crop, before returning cool water back to the river system.
Greencoat Capital, the fund behind the world-first plans, estimates that the greenhouses will produce vegetables with a quarter of the carbon footprint of regular greenhouses. It could also create 360 permanent jobs in the area, and up to 460 at peak season, it said. (guardian)

A UKPN trial aiming to alleviate capacity constraints on its network has freed up 95MW through the use of new technology.
The ‘LoadShare’ trial deployed technology from US-based energy tech firm Smart Wires to free up 95MW of additional network capacity on UKPN’s network.
In the year the trial has been running, £8 million in customer savings have been enabled due to the solving of a critical pinch point on a power line near the Esssex/Suffolk border, UKPN said.
The Smart Wires devices were installed on three steel overhead lines near Lawford running between large substations in a £5.5 million investment.
The devices balance power on parallel paths, allowing UKPN to add more renewables to the network without needing to invest in building new infrastructure. (current-news)

Shell UK and PassivSystems have launched a hybrid heating system called B-Snug, aimed at homes that use oil or LPG for heating.
The B-Snug manages a combination of an air source heat pump and a traditional boiler. The intelligent controls monitor the temperature in the home and analyse weather forecasts to switch between two heat sources: a newly fitted Samsung air source heat pump and the customer’s existing boiler. The system’s controls use machine learning to select the most appropriate heat source. By favouring the heat pump whenever possible, the system reduces heating bills. And, by providing homeowners with a way to use electricity to heat their homes, consumers reduce their use of oil or LPG, reducing carbon emissions. (newpower)

World’s largest wind turbines to be built off Yorkshire coast

The largest offshore wind turbines ever built will begin powering millions of British homes using blades more than 100 metres long by the early 2020s.
Each of the new mega-turbines planned for the world’s biggest offshore windfarm at Dogger Bank in the North Sea will reach 220 metres high and generate enough electricity for 16,000 homes.
The turbines are almost a third more powerful than typical turbines used today, each dwarfing the size of the London Eye, and will help to reduce the cost of generating wind power.
The Dogger Bank project, to be built from next year in a joint venture between SSE and Norway’s Equinor, will be the largest windfarm in the world once it begins generating power in 2023. (guardian)

Adam Forsyth of Longspur Research a new division of renewables investor Longspur Capital has produced an interesting report analysing the state of the EV charging infrastructure in the UK. The report analyses usage patterns for public chargers, the impact on the grid of increased EV adoption, how the grid might respond, how to overcome constraints (smart charging, V2G) and how adding storage will help solve capacity issues. It also looks at the economics of different charger charging models, and forecasts for demand on public chargers.
Let me know if you would like to receive a copy and I shall introduce you.

One criticism of the electric car revolution is that the cars are expensive and are only affordable to the few. This column sometimes feels like a weekly parade of gorgeous but unaffordable goodies. So, to redress the balance here are quick snippets on 4 cars that are either launching or already on the market at prices that do not make eyes water.

This venerable British brand was reborn under Chinese ownership (the mighty SAIC), the ‘new’ MG brand has been active in the UK for a good few years.
On sale in the UK now, this is a small SUV and priced at a very competitive £25,000 (after grant), it offers a range of 160 miles and sprightly performance.

Renault and local partner Dongfeng have launched this city car for the Chinese market. Range is 160 miles and base price after incentives is $8,650. Should attract buyers at that price.

Tata’s spearhead into the Indian market. It costs under $20k, but only boasts a range of about 100km so not sure we shall see it in Europe any time soon

Take a bow if you have heard of this Chinese manufacturer, but the A5 SUV has just got type approval for sale in the EU. It looks similar to the Hyundai Kona EV, in other words a small SUV (like the MG above). What will make people take notice of this car is that it is priced at around £25,000, yet boasts a very competitive range of c240miles on a charge. For perspective, you would struggle to get a base model of an equivalent petrol or diesel car for that

IRENA’s new report Hydrogen: a renewable energy perspective emphasizes the expected growing role of renewables-based hydrogen in the future energy mix.
IRENA said it projects an 8% share of total global final energy consumption to be attributed to hydrogen by 2050.
The new report finds that hydrogen from renewables can help tackle various critical energy challenges and could particularly offer ways to decarbonise a range of sectors where it is proving difficult to meaningfully reduce CO2 emissions.
Three key points from the report:

The report suggests a potential trade between countries that are well equipped producers in that they have abundant renewables (Australia, Chile, Norway) and ready made markets that require the energy (Japan, China, Singapore) (h2view)
Download the report HERE

And here are two stories that prove the point:

Tractebel Engineering and Tractebel Overdick are working on an offshore platform that could produce ‘green’ hydrogen from offshore wind power.
The companies, which are part of Engie, said they are developing a solution that could deliver up to 400MW.
The platform would incorporate all the technical components required for hydrogen production – including electrolysis units, transformers and desalinisation plants. (renews)

The world’s largest green ammonia plant powered by renewable hydrogen could be built in Queensland, Australia.

That’s according to the Australian Renewable Energy Agency (ARENA), which has announced $980,000 for Dyno Nobel to assess the feasibility of building a renewable ammonia facility at its existing facility in Moranbah.
The organisation says the facility will help accelerate the national hydrogen industry and help the chemicals sector reduce its emissions.
The proposed site would include a 160MW electrolyser and a 210MW co-located solar farm. (energylivenews)

The Orkney Distillery has secured a slice of the government’s £390m fund to help develop low-carbon technologies that could reduce carbon emissions from industry. It hopes to use the funds to become the first gin distillery in the world to run on hydrogen made from renewable energy rather than liquid petroleum gas.
The Orkney gin project will use renewable electricity to run an electrolyser that splits water into hydrogen and oxygen. (guardian)

The headline-grabbing first real attempt at a long-term solution to clear up some of the plastic polluting our oceans has announced its first success.
The Ocean Cleanup Project was first unveiled in 2012 by its inventor, Boyan Slat, and after years of development and testing, launched its latest floating device in June this year. The 600-metre (2,000-foot) long floating boom has captured and collected its first debris from the Great Pacific Garbage Patch – the island of rubbish in the Pacific Ocean that’s roughly three times the size of France, and growing.
The boom, catchily called System 001/B, is a self-contained system that uses the natural forces of the ocean to ‘passively catch and concentrate’ plastics and other floating debris. Launched from Vancouver in June, the boom collected not only larger visible pieces of plastic and huge ghost nets used in commercial fishing but also microplastics down to 1mm in size – something the cleanup team described as ‘a feat we were pleasantly surprised to achieve.’ (forbes)

Tesla’s record-setting second quarter deliveries weren’t a fluke, it seems. The EV builder has broken the record again with its initial delivery estimates for the third quarter, with about 97,000 cars reaching customers over the summer. That’s not a huge leap over the 95,356 EVs delivered in Q2, but it’s a stark contrast to the sharp drop-off at the start of 2019. There’s at least some sustained interest, then.
And crucially, these are newcomers adding to Tesla’s ranks. Much like in Q2, “nearly all” of the 79,600 Model 3s delivered in the period went to customers who didn’t hold a reservation.(engadget)

Alder Creek, a 530-acre forest billed as the largest privately owned giant sequoia property in the world, will be acquired by century-old conservation group, Save the Redwoods League. The group will ultimately transfer the land to the United States Forest Service to safeguard the trees as a national treasure.
Alder Creek’s sequoia trees number 483, many with diameters of 6 feet or greater. Mightiest of Alder Creek’s sequoias is Stagg Tree (below), believed to be the fifth-largest tree in the world. It towers at 250 feet with a width of 25 feet.
These giant trees are rare, live to 3,000 years and sequester large amounts of CO2. (inhabitat)

Business consulting giant Capgemini has launched a project which uses artificial intelligence (AI) to support farmers in improving environmental practices on their land.
Called FARM (Financial and Agricultural Recommendation Models) and delivered in partnership with social enterprise Agrics, the project is providing more than 200,000 small-scale farmers in Kenya with the hardware and software they need to analyse big data regarding issues such as weather patterns and soil quality.
The platform uses AI to “intelligently” collect and process the data, before providing the user with personalised insights and recommendations to optimise crop yield and eliminate inefficiencies. In sustainability terms, results of acting on the recommendations are likely to be better water management, the use of less fertiliser, the generation of less food waste throughout the value chain and improved incomes for farmers. (edie)