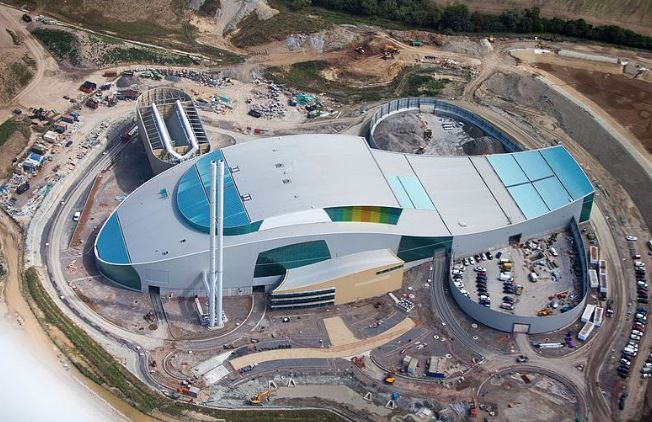 Celebrating the UK’s first new coal mine for 30 years??

Total to buy 1,600 Source London EV chargepoints from Bolloré
French utility Total is set to acquire a major electric vehicle chargepoint network from the Balloré Group.
The 1,600 strong Source London network, which partners with around 20 London Boroughs, was launched in 2010 by a TfL-led consortium. It was later spun out and ultimately ended up under the control of French conglomerate Groupe Bolloré, funders of AutoLib, Paris’ on-street EV hire scheme.
Bolloré used Source London to support its fleet of around 400 Blue City hatchback EVs. However the cars, made under a joint venture with Pininfarina, frequently suffered operational issues while maintenance costs were reportedly high. They were also expensive to hire.
Citing “operational constraints”, Blue City’s London operation closed for business February 2020, 18 months after AutoLib failed in Paris. At that time, Source London had said it was on track to hit 3,000 chargers this year, though those plans appear to have been hit by the impact of Covid.
Total aims to amass a 150,000-strong EV chargepoint network within five years. (theenergyst)

CCMacquarie makes £120m investment in UK waste giant Viridor
The investment is being provided by the bank’s infrastructure arm, Macquarie Infrastructure Debt Investment Solutions (MIDIS). MIDIS’s long-term debt financing replaces shorter-term debt raised by Kohlberg Kravis Roberts & Co. L.P for their £4.2bn acquisition of Viridor from Pennon Group in July 2020. MIDIS was also one of the largest institutional lenders in that financing package, investing on behalf of pension fund and insurance clients from the UK, Europe, and Asia.
The debt financing marks the latest expansion into sustainable infrastructure by MIDIS, which has previously provided substantial loans to UK solar and wind project. In total, MIDIS claims to have provided more than £1.5bn in debt financing to leading borrowers from across the energy, waste, solar PV and onshore and offshore wind sectors. (businessgreen)

Nine Elms heat network
Energy and services specialist, ENGIE, has begun work on a major new heat network which will serve future developments in the Nine Elms area of London – one of the capital’s largest brownfield regeneration sites.
The £30 million project will see ENGIE design, build, operate and maintain a district energy scheme; which will provide low carbon, cost-effective heat to new developments across the site, providing savings of 12,000 tonnes of CO2 (compared to traditional energy supply). The initial phase of the scheme will incorporate an Energy Centre with over 3MW of generation capacity and the installation of 1.5km of pre-insulated steel pipe network.
This first phase of the scheme will serve planned development within an area of Wandsworth in close proximity to the US Embassy and EcoWorld Ballymore’s Embassy Gardens; but is being built to enable expansion to serve surrounding areas in the future. (futurenetzero)

ASOS launches first circular fashion collection
This autumn, online retailer ASOS is launching its first collection of circular fashions. A collaboration with the Centre for Sustainable Fashion, the 29 women’s, men’s and unisex styles aim to prove that eco-friendly clothing can also be chic.
To create the new Fall 2020 collection, ASOS designers put together a set of goals. First was to attain a zero-waste collection, or at least to minimize waste. When possible, they chose materials that were already at least partially recycled, yet still durable. The designers also aimed for versatility, so that each garment could be styled in multiple ways. The collection also makes use of upcycling, or turning something old into something new. Using one recyclable material for the entire product, called a mono-material approach, means that at the end of each garment’s life, it will be easier to recycle. The fashions were also created with eventual ease of disassembly in mind. (inhabitat)

What happens when you mix a Tesla Model S and a Mk1 Mustang?
Quite a few people have tried to combine the looks of a classic with an electric powertrain. Russian startup Aviar Motors have done just that melding Model S running gear and some switchgear with a body clearly based on the original Mustang. The Aviar 67 tries to be faithful to the original but has modernised some aspects. The dash looks similar but has digital dials and Tesla style screens. Not sure Steve McQueen had a glass roof above him either. No pricing announced yet but won’t be cheap (hotcars)

Carbon8 to deploy carbon capture technology at Dutch energy plant
A UK firm pioneering carbon capture storage and utilisation (CCUS) technology is set to deploy its equipment for the first time at a Dutch power plant that generates energy from waste, it announced this week.
Carbon8 Systems plans to run its first energy-from-waste (EfW) pilot project at a plant owned by Dutch firm AVR, the firm announced thon Wednesday. The technology – which involves a modular solution known as a ‘COntainer’ – is to be installed at AVR’s plant in Duvien, 120km east of Rotterdam.
The pilot aims to demonstrate how fly ash produced by an EfW plant can be combined with captured CO2 from a plant’s flue gas emissions to create manufactured aggregate for use in the construction industry, the firm said. (businessgreen)

Siemens to develop CO2-free hydrogen production plant in Germany
Siemens Smart Infrastructure and hydrogen specialist WUN H2 have signed a contract to develop one of the largest hydrogen production plants in Germany.
With a power intake of 6MW in the initial development phase, the plant in Wunsiedel in northern Bavaria will run solely on renewable energy and will be CO2-free.
It will have the capacity to produce more than 900 tons of hydrogen per year during the first phase and when fully expanded, it will be able to supply up to 2,000 tons of hydrogen annually.
The plant – which will be built at the Energy Park in Wunsiedel next to the Siemens-manufactured battery storage facility – will convert renewable energy, such as solar and wind power, into storable hydrogen, making it available for applications in mobility and industry.
The hydrogen will be filled into gas cylinders for local distribution and shipped by truck to local and regional end customers, primarily in Upper Franconia, the Upper Palatinate, southern Thuringia and Saxony as well as Western Bohemia, Czech Republic. (energylivenews)

Honda leaves F1 circuits to pursue environmental initiatives
Honda has announced plans to leave the Formula One World Championship in pursuit of environmental initiatives and research on carbon-free technologies.
The Japanese motorcycle manufacturer says it will end its participation in the international sports event as a power unit supplier at the end of the 2021 season.
The firm says it intends to focus on developing technologies that could help it reach its 2050 carbon-neutral goal – these technologies include power units for fuel cell vehicles and battery electric vehicles.
In April of this year, Honda created a new centre called Innovative Research Excellence, Power Unit and Energy. (energylivenews)

Blackrock’s circular economy fund has raised $900m in its first year
BlackRock has revealed that its investment fund dedicated to accelerating the global development of a circular economy has raised more than $900m in its first year, growing from just $20m of seed funding from the asset management giant itself.
Launched last October, the fund was developed in collaboration with the Ellen MacArthur Foundation. It has backed companies of varying sizes and sectors, with packaging, chemicals, forest products, electronics, food and drink and fast-moving consumer goods (FMCG) accounting for significant proportions of the cohort. Also featuring in the fund are businesses from sectors including textiles, software, healthcare and e-commerce. (edie)