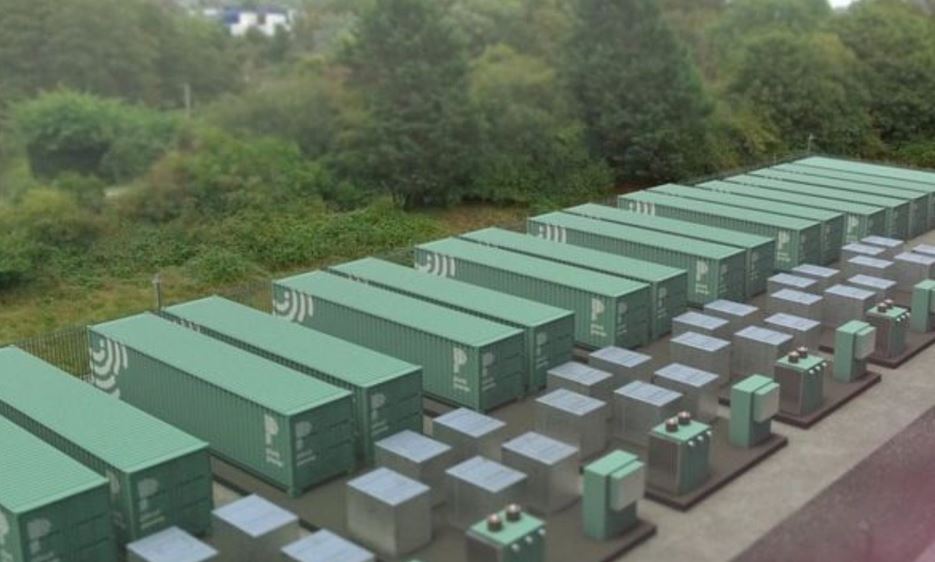 Pivot Power has said it wants to work with the EV charging sector and deliver it scalable power infrastructure following its acquisition by EDF.
Speaking to Current±, Pivot chief executive Matt Allen said that the deal had been in the works since the start of the year, with talks initially exploring how the company could raise funds to pursue a much-publicised, 2GW-strong pipeline of energy storage assets.
But as those talks progressed, it became clear the two companies were aligned and the “synergistic fit” of an acquisition suited both parties. (current-news)

Shell has acquired the floating wind specialist Eolfi. The French developer will become a subsidiary of Shell New Energies.
Eolfi is building a three-turbine pilot project off the north coast of France in waters too deep for fixed bottom structures. It will use MHI Vestas turbines. It also has a portfolio of onshore wind and solar assets. Shell has confirmed that these are all included in the deal. (greentechmedia)

Citing a “moral, ecological and legal duty”, mayor Marvin Rees has approved plans to stop diesel vehicles from entering the city centre.
The proposal could see all such privately owned vehicles barred from entering the proposed clean air zone every day between 7am and 3pm.
The plans are set to come into force by March 2021, but the thousand-page report must first be sent to the Department for Transport and Defra before a full consultation with locals in 2020. (independent)

Biogas to transport fuel plant gets the green light

The UK took a small but significant step forward on its journey towards decarbonising the transport sector on Tuesday, with the approval of the country’s first commercial scale Bio-Substitute Natural Gas (BioSNG) plant.
The plant, which is being developed by clean tech firm Progressive Energy, aims to generate renewable gas from up to 175,000 tonnes of bio resources, principally unrecyclable wood and waste that can be converted into a low carbon refuse-derived fuel.
The resulting biogas is set to be used in the transport sector, where it will generate sufficient fuel to power up to 1,000 low-carbon Heavy Goods Vehicles and buses every year, the company said. (businessgreen)

Telecommunications giant Liberty Global, the owner of Virgin Media, has unveiled detailes around a new project aiming to “revolutionise” on-street electric vehicle (EV) charging in the UK.
The project will see 1,200 EV charging points deployed across the UK over the next 18 months – all of which will be powered via Virgin Media’s street cabinets and ducts. Nationally, the company owns and operates 40,000 street cabinets and 170,000km of ducts.
All of the EV charging points will be connected to Virgin Media’s digital networks, in a model which Liberty Global claims is future-proof and scalable. (edie)

Decarbonising the UK economy will require a massive increase in clean hydrogen production, according to the Committee on Climate Change’s head of carbon budgets.
Speaking at an update of the HyNet project, David Joffe said the UK is “world class at setting emissions reduction targets” but must start delivering immediately to meet them.
To reach net zero requires multiple technologies and solutions and a “concerted package of action and new policies”, said Joffe, with hydrogen and carbon capture and storage (CCS) “pretty important”.
Electrifying heat and transport will “probably require a doubling of the electricity system,” said Joffe. “But that is not enough. We need to go from a bit of low carbon hydrogen to making it all low carbon, and having ten times as much.” (theenergyst)

Verge, the Finnish electric motorcycle company formally known as RMK, wowed the crowd at EICMA 2019 with the production version of their hubless rear wheel electric motorcycle, the Verge TS.
Verge announced its new name just hours before the big unveiling of their new TS electric motorcycle. The TS moniker pays homage to the bike’s original designer, Teemu Saukkio.
The electric motorcycle, previously known as the RMK E2, features a distinctive hubless rear wheel that also houses the bike’s 80 kW (107 hp) motor.
In true Tron cycle fashion, the motor is concealed within the rim of the wheel, leaving the entire center of the wheel open.
The motor is approximately as powerful as the Zero SR/F electric street fighter, but offers a mind-melting (and likely rubber melting) 1,000 NM (735 lb-ft) of torque. (elektrek)

Chancellor Angela Merkel’s government and German automakers agreed to increase cash incentives for electric cars, intensifying an effort to move away from the combustion engine and reduce harmful emissions.
A so-called environment bonus will jump by 50% to as much as €6,000 per electric vehicle and the auto industry will continue to cover half the cost, Merkel’s chief spokesman, Steffen Seibert, said in a statement. The changes will take effect this month and run through 2025 (registercitizen)

a well timed announcement, especially in the week that the first VW ID.3 rolled off the new line at the Zwickau factory

Lazard’s annual review of the costs of generating energy called the Lazard’s Levelized cost of Energy Analysis, Version 13.0 was published this week. This document is to the renewables industry what Wisden is to cricket fans. The story they tell is once again revelatory:
Yet again the costs of wind and utility scale solar continue to fall. The rate of decline in wind has slowed (down 4% y/y)  but the fall in solar continues to be impressive (down 7%y/y).
The LCOE of unsubsidised wind and solar are now around $40 per MWh, which now beats the cost of new build power from coal and gas and is close to beating the marginal cost of running those technologies. Add in a subsidy and it makes more sense to build new solar and wind than to run existing coal and gas plant.
Clearly this does not create a solution all by itself. In order to go fully renewable we need the cost of storage to reduce to such a level that it can create a competitive solution. Lazard publish now a companion document on the levelized cost of storage. The news is also good from this in that storage costs continue to fall, with lithium ion battery storage showing the fastest falls
Download both the LCOE Energy & LCOE Storage reports HERE

Expo pavillion of the week

Crops in the clouds: The rise of rooftop farming in space-starved Hong Kong

At the top of a three-storey building in Hong Kong, with car horns blasting on the streets below, Jim Fung teaches a dozen students how to thin out choi sum vegetables.
Fung was coaching the first cohort of students in an academy run by social enterprise Rooftop Republic to teach a new generation of urban farmers as demand for their skills soars.
The organisation is spearheading a movement to turn Hong Kong’s idle rooftops and urban spaces into farms to help residents reconnect with nature and make the finance hub more liveable.
Once a cluster of fishing and farming villages, Hong Kong is now one of the most densely packed cities on Earth, with 7.4 million people living on a quarter of its 1,100 square km (425 square miles) of land.
The rest is mainly country parks and rural areas, but living in skyscrapers and working long hours has caused Hong Kongers to lose touch with the nature around them, say students at the academy. (thisisplace)

Australia’s main grid – known as the National Electricity Market – broke through the 50 per cent benchmark for renewable energy in one trading period on Wednesday, the first time that half of net demand had been met by renewables.
The milestone was reached at 11.50am on Wednesdy, when the combined output of rooftop solar, large-scale wind, and large-scale solar reached 50.2 per cent of the near 25GW being produced on the main grid, which includes Queensland, NSW, Victoria, Tasmania and South Australia, but not Western Australia or the Northern Territory.
Rooftop solar provided nearly half the renewables output, or 23.7 per cent, followed by wind (15.7 per cent), large-scale solar (8.8 per cent) and hydro just 1.9 per cent. (reneweconomy)

Delhi restricted many private vehicles from the roads on Monday to try to lessen pollution as India grapples with a public health crisis over its toxic smog.
The “odd-even” scheme will restrict private vehicles with odd-number licence plates to driving on odd dates while even-numbered plates are allowed on even-numbered dates. It was begun days after authorities in the Indian capital began emergency control measures and ordered the closure of schools as pollution levels reached a three-year high.
The state-run Central Pollution Control Board’s air quality index for Delhi was “severe” at 436, about nine times the recommended maximum.
Traffic police officers, wearing protective masks, signalled cars to stop for not following the temporary rule. Delhi’s chief minister, Arvind Kejriwal, appealed for residents to follow the rule and for private taxi and auto-rickshaw drivers to support it. (guardian)

Tesla’s newly released version of solar roof tiles is promising to be a better green energy alternative. For one, it is easier to install than traditional shingles. Plus, these new Tesla tiles are more cost-effective than purchasing a new roof with separate solar panels. Because of the innovative upgrades, Tesla CEO Elon Musk optimistically projects the company will install 1,000 of these new solar roofs per week.
Tesla ventured into the solar roof industry three years ago in partnership with SolarCity, which Tesla acquired in 2016. The most recently upgraded solar roof tiles are designed to look like normal roof tiles yet double as power-generating solar panels.
This newly unveiled solar roof tile is a third-generation version that features more refinements like increased size, beefed up power density, reduced components for better efficiency and improved roof edges that no longer require time-consuming “artisanal” fine-tuning onsite. The new solar roof tiles are made from tempered glass and are three times more durable than standard roofing tiles. (inhabitat)

A global group of around 11,000 scientists have endorsed research that says the world is facing a climate emergency.
The study, based on 40 years of data on a range of measures (see graphs below), says governments are failing to address the crisis.
Without deep and lasting changes, the world is facing “untold human suffering” the study says.
The researchers say they have a moral obligation to warn of the scale of the threat. (bbc)
Download the report HERE

Ancient Greek writings describe livestock eating seaweed, as do Icelandic sagas. And, as the picture shows, sheep on North Ronaldsay, in the Orkney Islands of Scotland, still graze on the stuff. But that is now seen as unusual. It may not be in the future, however, as research conducted in Australia and New Zealand suggests algavory of this sort may reduce greenhouse-gas emissions from stock animals.
The research in question is being co-ordinated by CSIRO, Australia’s main science agency. The project is looking into microbes that inhabit the stomachs of ruminants such as cattle and sheep. These bugs transform those animals’ fibrous fare into energy-rich molecules, some of which the host animal is able to absorb and utilise.
One energy-rich molecule that is not absorbed, though, is methane. Instead, the animals belch it into the atmosphere. Which is a problem, because methane is a greenhouse gas that has a warming effect 28 times as powerful as carbon dioxide’s. Since this loss of methane also deprives the host of the energy therein, thus probably reducing its growth rate, controlling methanogenic bacterial activity in ruminants looks like a beneficial twofer.
The antimethanogenic powers of Asparagopsis, the seaweed in question, were discovered in 2016 and experiments involving it have been going on since then. One of the latest, published in October in the Journal of Cleaner Production, showed that dairy cows eating a diet containing 1% Asparagopsis produce only a third of the methane belched by cows on seaweedless diets. Since a cow has about the same greenhouse effect as a car, cutting the emissions of even a portion of the world’s 1.5bn cattle would bring great benefit. (economist)