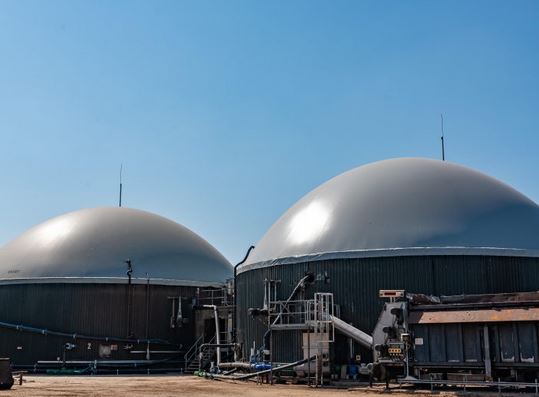 Apoliogies for smaller and late Titbits. Been a busy week

Scottish hydrogen network trial gets underway
Hydrogen from Grangemouth site to be transported along 29 kilometre section of previously decommissioned gas pipelines
Plans to build a network of hydrogen pipelines across the UK took a step forward today, with the start of a Scottish pilot project to demonstrate how gas pipelines could be repurposed to transport hydrogen.
Petrochemicals giant INEOS and gas network operator SGN announced the start of the project which will see hydrogen supplied by INEOS through a 29km section of decommissioned gas pipeline between the Grangemouth site and Granton.
The trial, which is funded by the Energy Regulator and gas distribution companies, aims to explore how existing gas networks could be repurposed for hydrogen. (businessgreen)

Adapt Biogas Murrow Plant Achieves ADBA Certification
The anaerobic digestion (AD) site at Murrow in Cambridgeshire, operated by Adapt Biogas Ltd, has been accredited under the Anaerobic Digestion Certification Scheme (ADCS) – a best practice scheme managed by the Anaerobic Digestion and Bioresources Association to recognize the all-round safety, environmental and operational performance of AD plants.
The Murrow site is an agricultural AD plant which produces renewable energy for export into the national transmission system at a high pressure of maximum 75 bar. The first AD plant in the UK to do this, it has the potential to inject as much as 15,000 standard cubic meters of biomethane per hour (scmh) – this represents a huge volume by industry standards.
Currently housing six digesters, the Murrow AD plant is set up to achieve biomethane exports of 900 scmh. It also produces electricity from two 250kWh biogas CHP units. In addition to powering the site infrastructure, this electricity is exported to the network. The plant uses cattle-manure feedstock, alongside outgrade fruit and vegetable, dairy slurry and a small amount of purpose grown energy crops. In total the site processes approximately 115,000 tons of feedstock per year. (renewableenergymagazine) 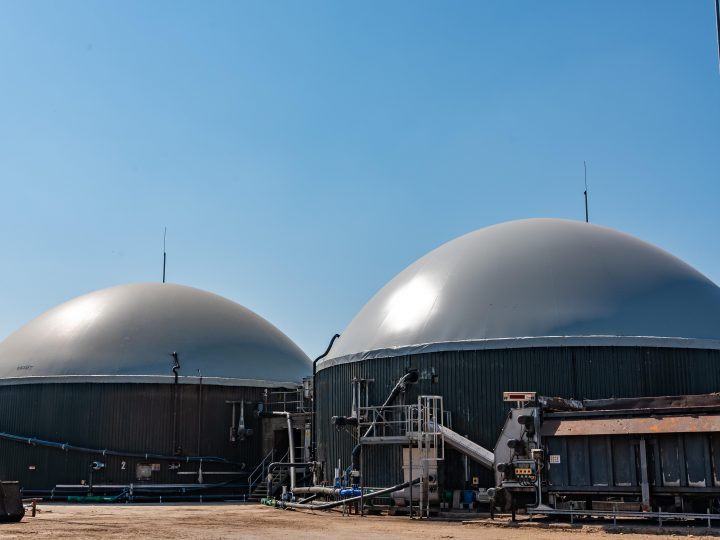 UK to revamp methodology that measures energy performance of UK homes
BRE is working with BEIS on a new version of the Standard Assessment Procedure (SAP), which is used by the Government to assess and rate the energy performance of residential buildings. This methodology is also used to create the information on EPCs.
The new methodology – known as ‘SAP 11’ – will help to identify how new technologies such as heat pumps, renewables, smart controls and energy storage can be applied across residential dwellings.
SAP 11 is expected to be developed for use in the Future Homes Standard, which is expected to be implemented by 2025 to ensure the UK’s housing stock can contribute to the net-zero trajectory. (edie)

Anesco to deliver 49.9 MW solar farm at Sutton Bridge
Anesco has begun construction of the 49.9 MW Sutton Bridge Solar Farm, EDF Renewables’ first major solar project in the UK, which will be capable of generating renewable electricity for more than 9,800 households, and deliver significant benefits locally, including an annual community benefit fund of £20,000.
Following public consultation by both EDF Renewables and South Holland District Council, planning permission was granted in March 2021, and early-stage works have now begun on site, with generation of green electricity likely by late 2022. (renewableenergymagazine)

Mercedes adds SUV to the EQE range
There was a time when Mercedes would launch three variants of a range: saloon, estate, and sports/coupe and this was consistent across their major platforms, notably the C Class and E Class. Now that they have launched the electric equivalent of the E Class saloon called the EQE and its sporty sister the EQS, it would make sense to add the estate variant. However nowadays most car makers prefer to add a SUV and Mercedes are doing likewise with the launch this month of the EQS SUV.
The SUV is well appointed and will be competitive on driving range, comes in either rear wheel drive of 4MATIC. One differentiating feature is that they offer as an option a suite of screens that run the width of the dashboard, which may prove popular.
It is a sign of intent from Mercedes that they are filling out their electric range,  but they have work to do even to capture third spot in the global EV market as the articles below show.

C-Job design New Class of Hydrogen Tanker
C-Job Naval Architects has designed a brand new class of liquid hydrogen tanker that will revolutionize the renewable energy market. The tanker concept, developed in partnership with LH2 Europe, is a critical element in realizing a green end-to-end liquid hydrogen supply chain.
LH2 Europe will use the abundant amount of renewable electricity in Scotland to produce green hydrogen and market it at a competitive price with diesel. The new tanker will then transport the liquid hydrogen from Scotland to Germany.
The tanker has enough capacity onboard to deliver fuel for 400,000 medium-sized hydrogen cars or 20,000 heavy trucks. As it is currently planned, the tanker will deliver 100 tons of hydrogen per day, and gradually increase the delivery to 300 tons per day, depending on demand.
When completed, the liquid hydrogen tanker will be 141 meters long and will have a storage capacity of 37,500 cubic meters. The vessel will be powered by hydrogen fuel cells and will be equipped with three liquid hydrogen storage tanks.
The tanks will have a much lower boil off than those currently used in the maritime industry. The limited remaining boil off will be captured and directly utilized in hydrogen fuel cells, providing power to the vessel’s propulsion systems, resulting in emissions of water only. The vessel itself will have zero greenhouse gas emissions during operations.
The ship is expected to be ready and commissioned six months before the first delivery of hydrogen in 2027. (renewableenergymagazine)

European electrolyser pipeline hits 142GW
Aurora’s global electrolyser database has identified a 142GW pipeline of electrolyser projects in Europe by 2030, which is more than the new EU pledge.
The Ukraine war has resulted in a sharp increase in gas prices, pushing up the cost of producing blue or grey hydrogen.
Aurora Energy Research estimates that green hydrogen costs will fall through the 2020s as a result of technology developments and maturation of the industry, reaching cost-parity with blue hydrogen in some European countries by 2030.
As a result of the war on Ukraine, the European Commission released the REPowerEU plan to reduce dependency on Russian gas.
The plan doubles the previous target of 40 GW hydrogen electrolysers by 2030 to now reach 75 GW by 2030.
Aurora found that current and planned electrolyser manufacturing capacity can meet Europe’s electrolyser target, yet it only satisfies two thirds of the global electrolyser pipeline planned for delivery by 2030. (renews) 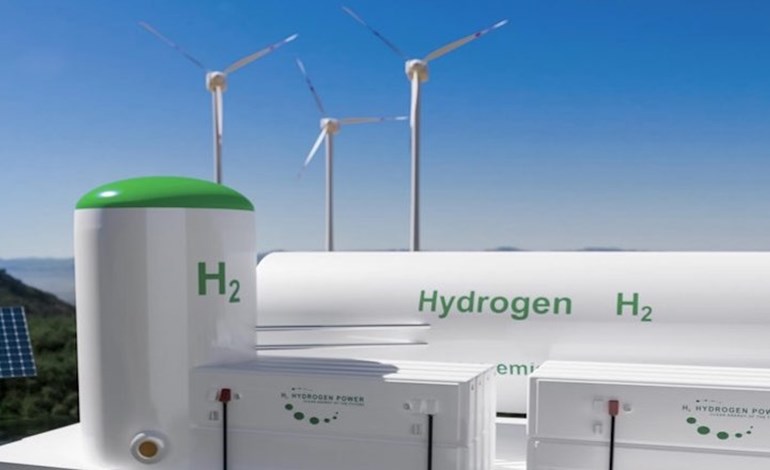 The following Titbits were taken from InsideEV’s and paint an interesting picture of the growth of the EV market. I still find it extraordinary that the big, traditional OEM’s are scrapping for third place and that two companies that were unknown 15 years ago are dominant.

Strong growth despite tough markets
Global passenger plug-in electric car sales significantly increased in March, against all issues in the global supply chains.
According to EV-Volumes data, shared by Jose Pontes, some 851,489 new passenger plug-in electric cars were registered in March, which is 60% more than a year ago. Market share increased to 15%, including 11% for all-electric cars.
It’s nice to see that more than one in ten new cars sold globally is already battery-electric.
Plug-in car registrations:
BEVs: about *624,000 (up 81% year-over-year) and 11% share
PHEVs: about *227,000(up 19% year-over-year) and 4% share
Total: 851,489 (up 60% year-over-year) and 15% share
* estimated from the market share

Tesla Model Y is top dog
In March, the Tesla Model Y set another monthly sales record for an electric car – 92,221 units, which allowed it to strengthen in the first place year-to-date (169,682 registrations).
The Tesla Model 3 was second (81,713), while the Wuling Hong Guang MINI EV completed the podium (47,563). Among the top models, we can mention also BYD Song PHEV (22,383), BYD Qin Plus PHEV (14,282). A total of 13 models noted more than 10,000 units last month (including the Volkswagen ID.4 and Hyundai Ioniq 5).
The year-to-date numbers reveal two Teslas at the top – Model Y and Model 3, followed by five Chinese models. The third non-Chinese EV in the top 10 is the Volkswagen ID.4, which very likely has a chance to get into the top 5 later this year.

Project to grow corals on offshore wind turbine foundations
Ørsted has launched a new project to grow corals on offshore wind turbine foundations at the Greater Changhua wind farms off the coast of Taiwan.
That follows scientific trials to grow juvenile corals on underwater steel and concrete structures at a test facility.
Scientists had previously warned about the risks that corals face as countries embrace a massive expansion of offshore wind.
It has been predicted that by 2050 nearly 75% of corals will be in a critical state because of human activities and the changing environment.
Coral reefs provide protection to coastal areas by reducing the power of waves hitting the coast – millions of species of wildlife also depend on coral reefs. (futurenetzero)

Transparent solar panels could replace windows in the future. Hopefully soon.
To be clear, transparent solar panels sound too good to be true.
They have the potential to shift cities from major energy users to energy providers in an instant and could usher in a new era of clean energy revolution while safeguarding farmland and natural habitats.
Transparent solar is a cutting-edge technology that gathers and uses light energy through windows or any glass surface, regardless of the angle. It has the potential to be a game-changer in terms of broadening the scope of solar.
In terms of engineering, researchers have created several means of transparent solar technology. Most generally though, the majority of them function more as a transparent solar concentrator, which means they are made to absorb specific UV and infrared light wavelengths that aren’t visible to the naked eye and transform them into energy capable of powering electronics.
This technology is also called photovoltaic glass, and it’s manufactured to provide a ranging level of transparency. Back in 2014, researchers at Michigan State University (MSU) developed the first entirely transparent solar concentrator, which could convert almost any glass sheet or window into a PV cell.
And by 2020, scientists in the United States and Europe have achieved 100 percent transparency for solar glass, bringing us one step closer to the goal of a sustainable future that does not rely on the grid of the fossil fuel industry.
For example, the Copenhagen International School’s design utilizes 12,000 hued but clear solar panels all over the building, producing 200 MWh of energy annually — that’s apparently more than half of the energy the building consumes.
In another example that took place last year, the Biomedical and Physical Sciences Building on the campus of Michigan State University was upgraded with the installation of 100-square-feet transparent solar glass panels which were situated above the building’s entryway (see below). They will generate enough electricity to power the lighting in its atrium.
However, there are some obstacles standing in the way. Before the technology can be scaled up, scientists need to up its efficiency, as there is an efficiency/transparency tradeoff. The more transparent the panel is, the less efficient it is, which is why see-through panels are not expected to exceed or replace the standard solar panels we’ve grown accustomed to. (interestingengineering) 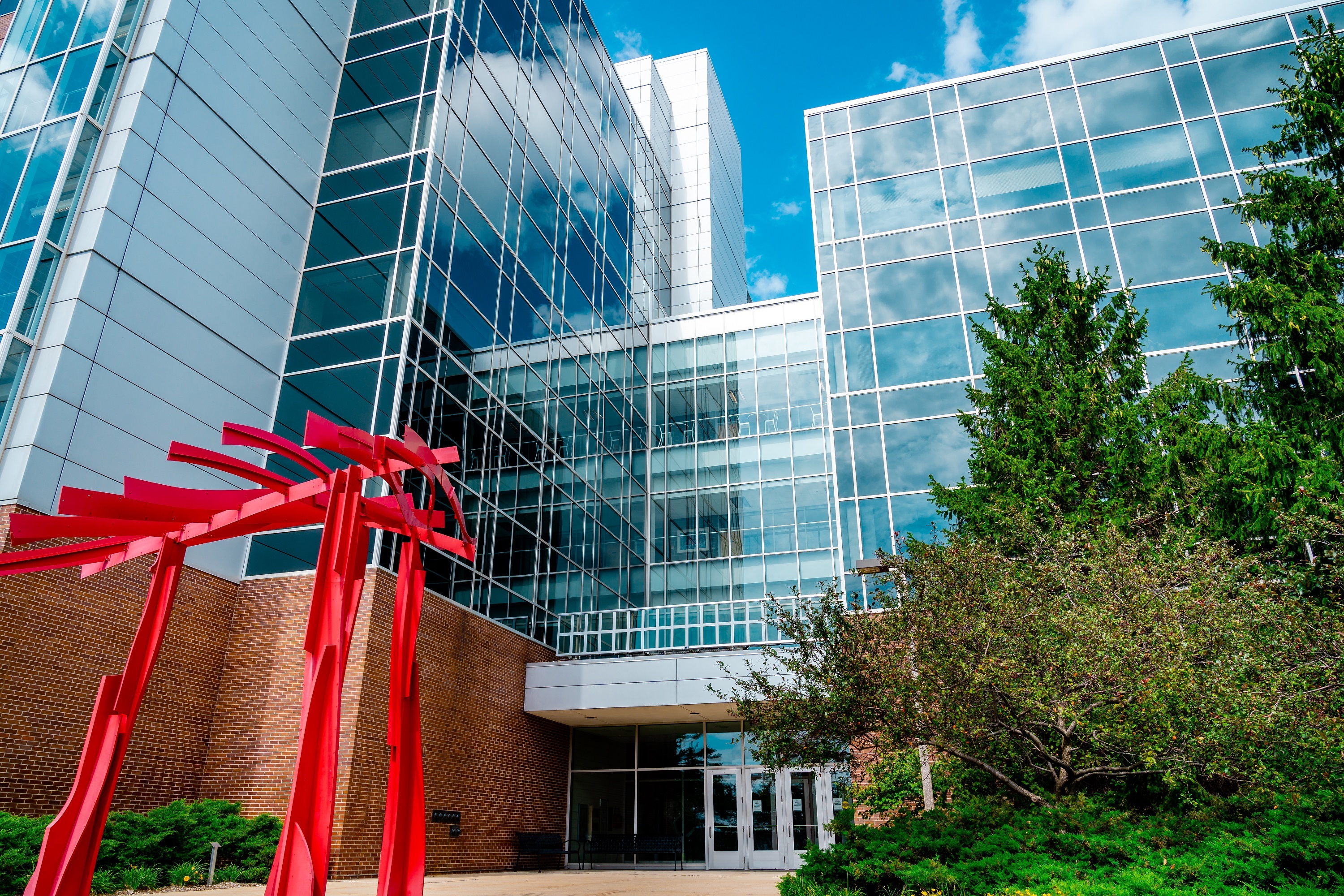