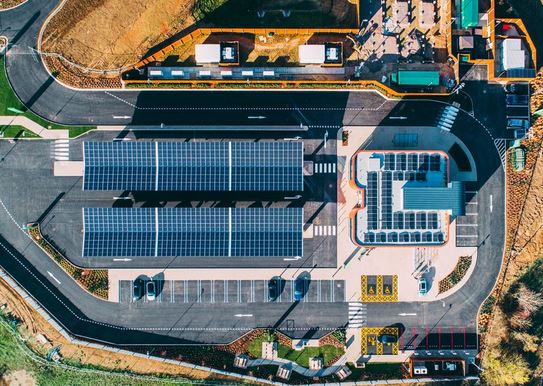 Two stories this week about EV charging networks needing modernisation. A reminder that you can be too early into a new market on occasion.

Gridserve takes stake to boost Ecotricity’s Electric Highway
The new partnership sees Gridserve taking a 25 per cent stake in the Electric Highway, bringing with it a whole load of new technology.
New pumps will be installed, in many cases replacing those single use pumps with a unit that offers three connectors – CCS, CHAdeMO and AC – and will allow charging of two vehicles at the same time.
It will also bring contactless payment technologies to those pumps – while the number of pumps available at sites will be expanded with the installation of new 350kW chargers.
Gridserve has said that the expansion will see 6-12 additional chargers installed at each location, which represents a pretty big expansion of the current offering. (pocket-lint) 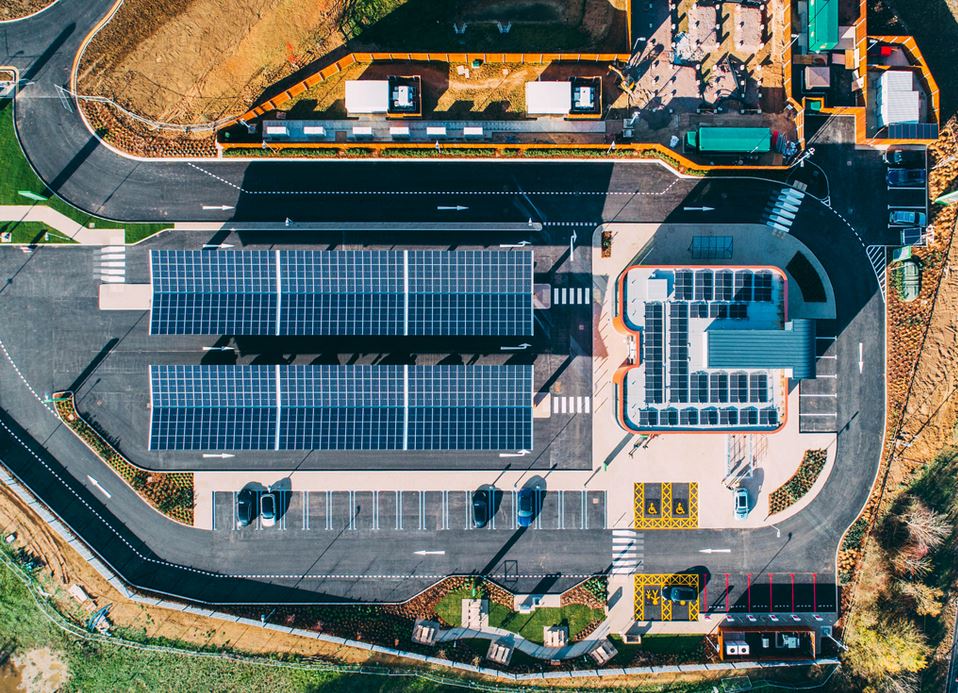 Industry veterans launch renewable energy multi-manager platform
Pensions industry veterans Wendy Mayall and David Hunter have founded a multi-manager platform that aims to open up access for pension funds and other institutional investors to deploy assets into renewable energy.
Mayall, the ex-CIO of Unilever pension fund, and Hunter, a former head of research at Aon, launched Renewity because they believe that with single manager options there is a lack of “scale and speed” in accessing renewable energy opportunities, and that this is in turn creating a capacity challenge that could impede efforts to channel more investment into renewable energy.
By providing investors with access to a range of specialist renewable energy managers, deals and related opportunities, Hunter and Mayall believe that their platform can put more capital to work faster, diversify drawdowns, optimise liquidity/yield, and reduce risk for investors more efficiently than a single manager proposition. (ipe)

Government unveils 5 legally binding environmental principles
Defra today launched a consultation on the principles, which it plans to put on a legal footing through the landmark Environment Bill that is expected to return to Parliament this autumn ahead of the crucial COP26 Climate Summit in November.
The new principles would inform all future government policies and would effectively replace similar principles that underpinned EU legislation.
Specifically, the new rules would require policymakers to adhere to:

Environment Secretary George Eustice said the proposed principles would help “embed the environment in the design, development and delivery of the government’s work”. (businessgreen)

BP Pulse to invest £2m upgrading old charging infrastructure
BP Pulse is spending £2m to help local authorities across the UK upgrade old public charging points with faster and more reliable units.
The charging company has invested about £400,000 upgrading more than 50 existing chargers owned by councils and is due to spend £700,000 on replacing and upgrading another 300-plus units.
These old chargers were typically installed about 10 years ago under the government-funded Plugged in Places scheme – the first major roll-out of public charging infrastructure.
According to BP Pulse, many of these early charge points were installed without long-term sustainability in mind and have suffered from under-investment, leaving them unusable. (theenergyst) 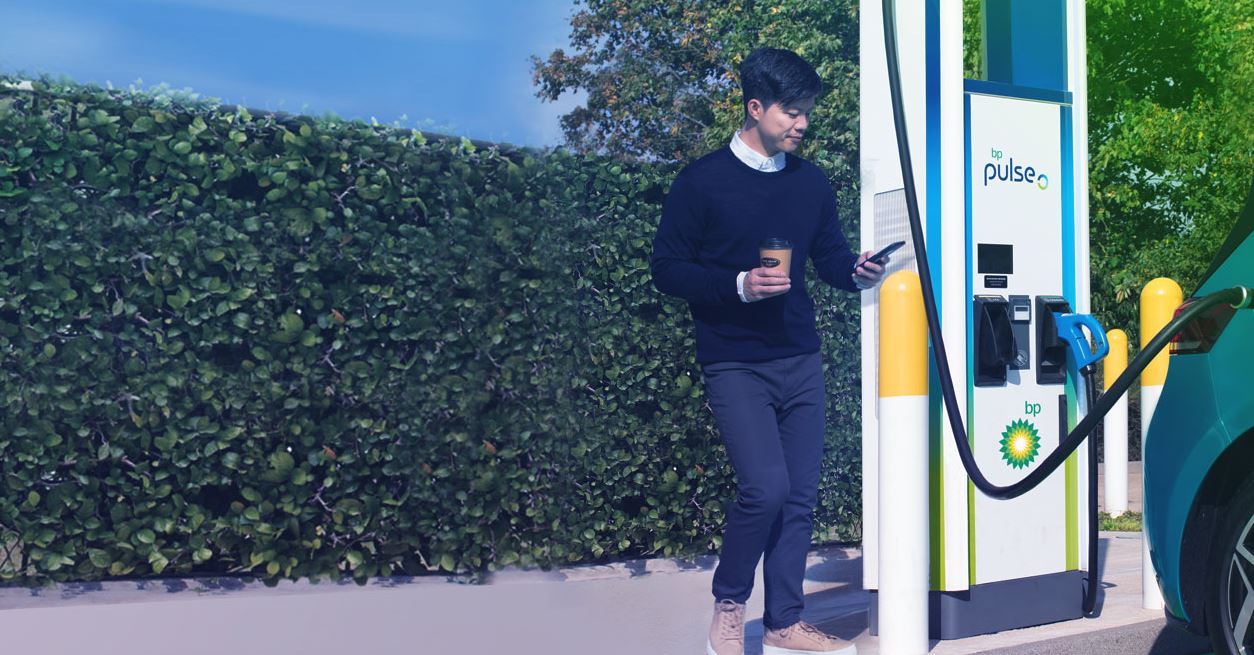 Thrive takes on second battery
Thrive Renewables has acquired the rights to its second battery storage project.  The  20MW battery on Feeder Road in Bristol will offer flexibility, delivering 20-40MWh (one to two hours). Thrive is now working to identify partners for the construction phase which is expected to complete in spring 2022. Bristol developers Aura Power developed the project.
Feeder Road will participate in wholesale market trading and future capacity market auctions. It will also provide frequency response and balancing services to the National Grid and the local distribution network. (newpowerinfo)

Cumbria can create 9,000 green jobs by 2035, without a coal mine
In response to the news that there will be an enquiry into the planning consent granted to the Cumnbrian coal mine project, a group called Cumbrian Action for Sustainability have published a report.
The report outlines how 9,000 jobs could be created across the county in low-carbon sectors including renewable electricity generation and distribution; renewable heat; retrofitting buildings and sustainable waste management by 2035. Around half of these roles, the report stipulates, would be based in West Cumbria, where the UK’s first deep coal mine in more than three decades has been proposed. (edie)
Read the report HERE

Audi Q4 e-tron will slot into premium electric SUV niche perfectly
VW group have for many years used a strategy of running a number of brands to target different demographics, which has mostly worked well. The cars are made from basically the same platform yet VW address the core buyers, Skoda the value conscious, SEAT the more sporty(?) and Audi caters to more up-market tastes. As VW roll out their MEB platform the focus is on how their brands address the electric SUV space, with the VW ID.4 just launched as, this week was the Skoda Enyaq iv, to pretty good reviews. Eyes now turn to the imminent arrival of the Audi badged variant, which I suspect will be a good fit for quite a few Titbits readers.
This week Audi concentrated on the interior, which will be a cut above the others, and also showed off the heads-up-display which features augmented reality to enhance what you are seeing on the road (just about visible in the picture below). The AR will actually show you where you need to turn. It will be interesting to see whether people love or hate having graphics moving around in their line of site, or whether this joins a lengthening list of tech add-ons that just annoy or confuse drivers. 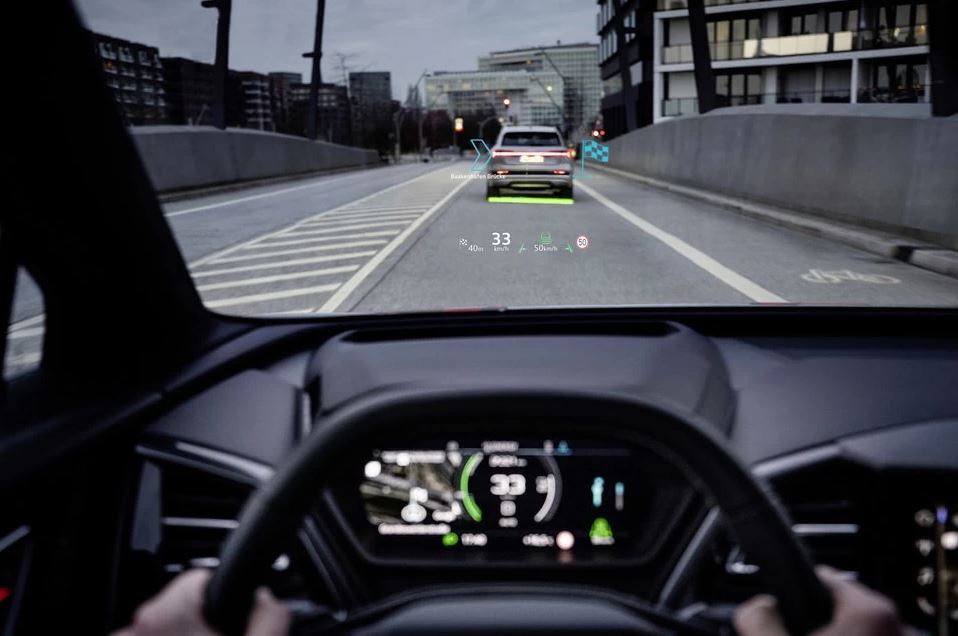 Hungary to install solar at site of last coal plant as it fast-tracks coal exit
Hungary has become the seventh EU country to plan a coal phase-out by 2025, and the sixth European country to bring forward its coal phase-out plan after announcing it will bring forward the closure of its last coal generator and partially replace it with a solar farm.
Hungary’s Secretary of State for the Development of Circular Economy, Energy and Climate Policy, Attila Steiner, announced at a meeting of the Powering Past Coal Alliance last week that Hungary would bring forward its coal phase-out plan by five years, from 2030 to 2025. (reneweconomy)

Storage start-up Gravitricity’s £1m demonstrator takes shape
Gravitricity has celebrated a new milestone, as the 15-metre high lattice tower for its storage demonstrator project is installed ahead of testing beginning next month.
The Leith based energy storage start-up is building a £1 million 250kW demonstration project at Forth Port’s Prince Albert Dock, Edinburgh, Scotland, made up of the tower, two 25-tonnes weights suspended by steel cables, plus two fully grid-connected generator units.
Now the tower, which has been fabricated by ESL engineers in Hull, has been installed along with the top frame, and work has begun on installing the electrical connection to the winch container, which is expected to be fully commissioned by April.
This will allow Gravitricity to move on to the test phase, where the company will begin by lowering weight to generate full power, allowing it to verify the speed of response possible. (solarpowerportal) 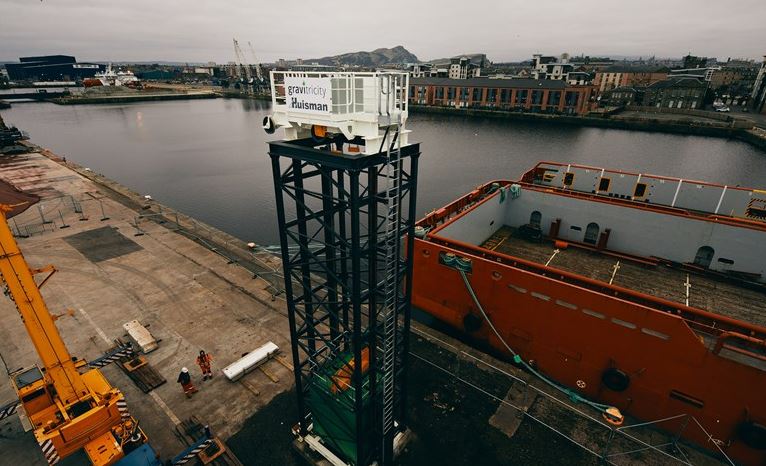 Tesla’s cost advantage
Tesla appears to have a significant lead when it comes to battery cell cost compared to the rest of the auto industry, according to a new report.
Tesla has long been believed to be the leader in battery cost thanks to its early investment in developing battery packs using common cylindrical battery cells, while the rest of the industry has been mainly using pouch and prismatic cells.
Most automakers are fairly opaque when it comes to battery cost, but Cairn Energy Research Advisors have been attempting to track battery costs as best as possible, and they released a new report putting some actual numbers on costs.
They claim that Tesla currently leads the industry by a somewhat significant margin (via CNBC):
“According to Cairn ERA, Tesla pays an average of $142 per kilowatt hour (kWh) for battery cells purchased from its three suppliers: Panasonic, LG Chem and CATL. By comparison, GM pays an average of  $169 per kWh for its battery cells while the industry average runs at about $186 per kWh.  Paying far less than other automakers for lithium-ion battery cells allows Tesla to also lead the industry in the cost to manufacture EV battery packs. Cairns data estimates that Tesla’s battery packs cost, on average, $187 per kWh while GM’s packs cost $207 per kWh and the auto industry spends an average of $246 per kWh for battery packs.” (elektrek)

GE claims top spot in 2020 wind rankings
GE carved out the largest market share in 2020 in a record-breaking year for global wind capacity additions, according to Bloomberg New Energy Finance (BNEF).
Developers commissioned 96.3GW of wind turbines globally in 2020, compared with 60.7GW the previous year, most of which (94%) were on land.
The latest data from BNEF shows that GE emerged as the global number one spot in terms of capacity installed, with Goldwind in second place, Vestas in third and Envision in fourth place.
The four manufacturers accounted for 51% of the machines deployed last year and each commissioned over 10GW, with the gap widening between the leading manufacturers and smaller players, BNEF stated. (renews)

German researchers develop hydrogen paste that could fuel vehicles
A team of researchers at the Germany-based institute developed a hydrogen paste, which bears a passing resemblance to toothpaste and could one day be used to fuel vehicles.
Researchers at the Fraunhofer Institute of Manufacturing Technology and Advanced Materials (IFAM), led by Marcus Vogt, named their product, which could be revolutionary in the transport sector, “Powerpaste.”
The paste’s main ingredient is magnesium hydride, a compound that, when introduced to water, reacts with it to form hydrogen and magnesium hydroxide. It would be stored in vehicles in the form of a cartridge and to refuel, a driver would swap a used hydrogen cartridge with a new one and then fill the tank with water.
According to researchers, the paste offers a safe, convenient and affordable hydrogen fuel option for small vehicles such as scooters, or in flying drones where weight is at a premium. (dailysabah) 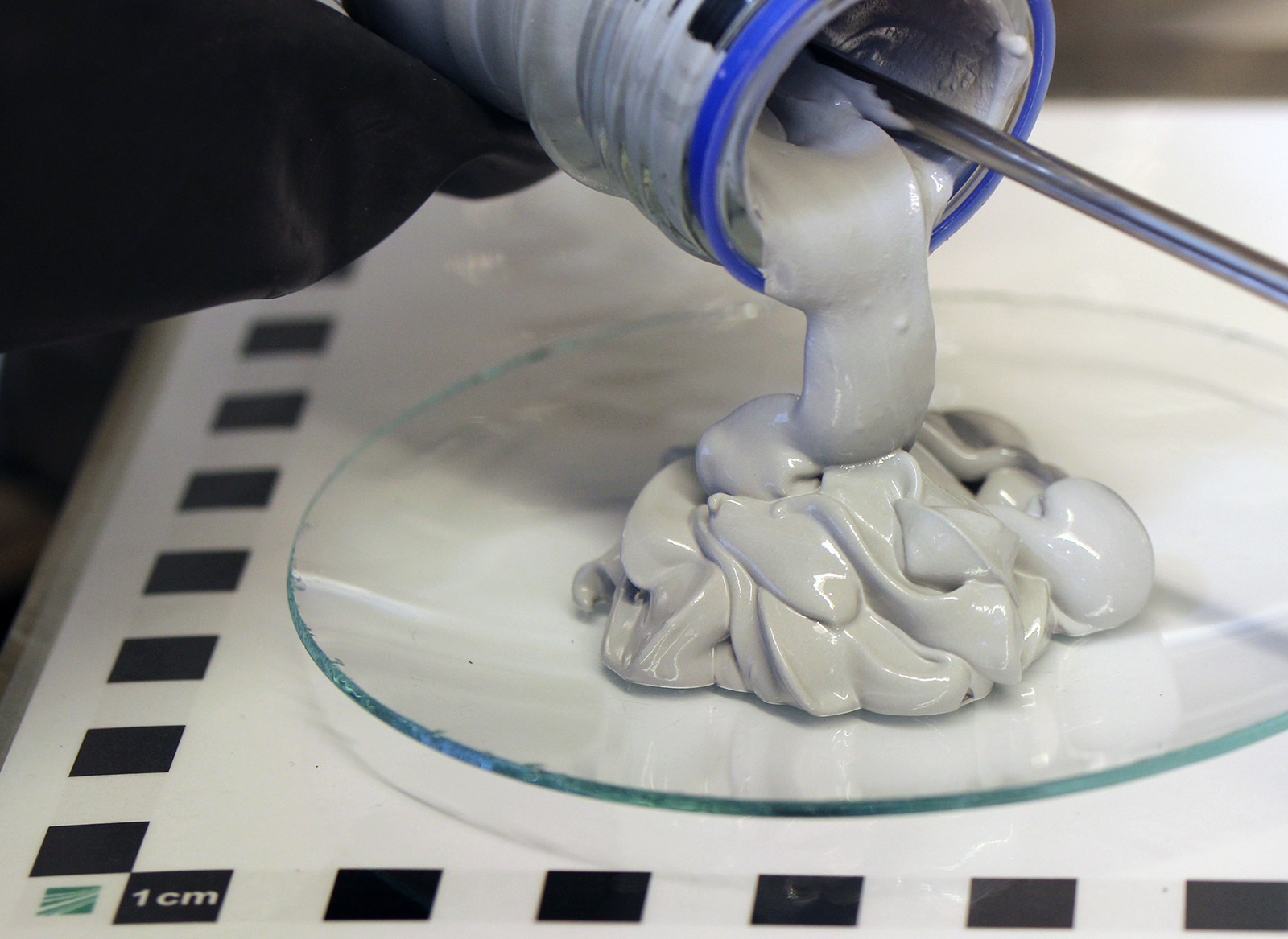