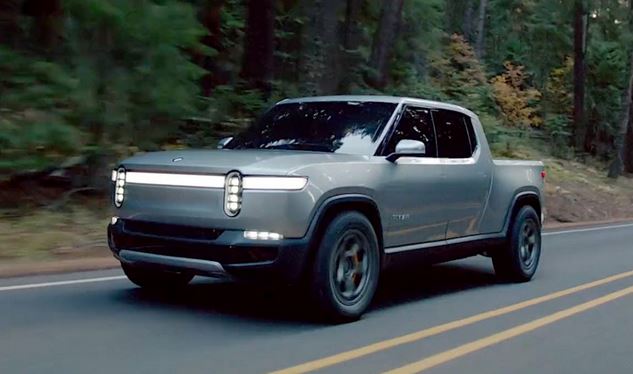 Those of you who read this only for the EV of the Week, and I know there are a few, may be disappointed by this weeks ‘bit consisting of a load of double decker busses. Sorry for that, but I think deployment of electric busses is a big game changer in the fight to decarbonise. Replacing a bus fleet makes a serious dent in a city’s fuel consumption and consequent air pollution. This is why the denier fraternity and oil interests go out of their way to try and vilify electric busses.

Titbits therefore exhorts all city authorities to step up the deployment of zero-emission busses.

Amazon.com Inc and General Motors Co are in talks to invest in Rivian Automotive LLC in a deal that would value the U.S. electric pickup truck manufacturer at between $1 billion and $2 billion, people familiar with the matter told Reuters on Tuesday.
The deal would give Amazon and GM minority stakes in Rivian, the sources said. It would be a major boost for the Plymouth, Michigan-based startup, which aspires to be the first carmaker to the U.S. consumer market with an electric pickup.
If the negotiations conclude successfully, a deal could be announced as early as this month, the sources said (reuters)

Good Energy is to partner with battery storage specialists Belectric and Powerstar for its commercial energy storage offering.
The clean energy supplier has selected the duo following a competitive tender and procurement process, and they will be tasked with the design, installation, operation and maintenance of commercial-scale battery storage projects the company sources.
In late 2017 Good Energy announced its maiden energy storage project, unveiling plans to install five 50kW battery storage units for Eden Project, one of the company’s most prominent customers. (current-news)

Infrastructure and private equity fund manager Zouk Capital is entering into exclusive negotiations to manage the UK Government’s Charging Infrastructure Investment Fund (CIIF), which was announced in the 2017 budget and aims to help increase the uptake of electric vehicles (EVs) in the UK.
The CIIF is a £400 million investment fund in which £200 million will be raised from the private sector matching another £200 million from the UK Government. The fund was announced in the Autumn Budget of 2017 as part of a package measures aiming to increase UK uptake of EVs, which is expected to play a pivotal role in both the decarbonisation of the UK transport sector and much needed improvement in air quality. Increased uptake will also help to ensure the UK maintains a leading role in the transition to EVs. (renewableenergymagazine)

EDF-backed solar, storage and blockchain pilot to get underway

An EDF Energy-backed community energy trading pilot is to start next month, allowing residents of a Brixton estate to trade solar energy between each other.
Project CommUNITY, as it has been dubbed by EDF’s R&D division, will see the French energy firm collaborate with community renewables firm Repowering London and University College London’s Energy Institute to enable peer-to-peer trading of locally-generated power.
Residents of Elmore House in Brixton, South London, will be allowed to access electricity generated from a rooftop solar system installed atop the estate, store it in a domestic battery unit and trade it amongst themselves.
Those energy trades will be enabled using blockchain technology, and a consumer-facing app has been produced to allow residents to access the trading platform. (current-news)

Next Energy Solar Fund is planning to spend £20m on commercial building rooftop PV in 2019.
The fund has partnered with Zestec Asset Management to develop and build out new projects and aims to acquire existing rooftop schemes as well as fund new developments.
The plan is to sell electricity generated from the schemes via power purchase agreements with commercial landlords, giving them a cheaper rate than drawing from the grid. It will offer 15-25 year terms.
The fund said it has committed £5m to acquire an “initial batch” of projects over the next few months. Projects that are completed prior to 1 April this year will receive a 20-year feed-in tariff. (theenergyst)

Bristol Energy to pioneer heat as a service

Bristol Energy has become the first energy supplier in the UK to trial selling ‘heat as a service’, rather than kilowatt hours (kWh).
Currently energy suppliers in the UK can only sell energy to customers in strict units known as kilowatt hours (kWh). But through a government-backed trial run by Energy Systems Catapult, Bristol Energy is offering households the chance to buy a ‘Heat Plan’ tailored to their individual home and lifestyle.
Heat Plans provide consumers with room-by-room, hour-by-hour control over their heating. Using data collected via a smart heating control system, the energy provider can calculate a fixed monthly cost that is bespoke to the triallist’s home and lifestyle and does not fluctuate with the weather.
This approach is designed to give people greater control over comfort and cost. Crucially, it also:
– Provides a commercial incentive for energy providers to deliver comfort using less energy and carbon;
– An opportunity for energy providers to differentiate themselves in a market; and
– Could create a route-to-market for low carbon technology. (escatapult)

Viridor has issued a warning on lithium ion batteries after it’s believed they may have been responsible for setting 300 tonnes of refuse on fire last month at its landfill site in Dunbar.
The fire took place in the early hours of January 22 in a building where waste is stored before it is landfilled, and at its peak saw around 40 firefighters dealing with the blaze
The company has now issued a warning with the Scottish Fire and Rescue Service (SFRS) highlighting the risks if these batteries are not disposed of correctly. (letsrecycle)

Vestas extended its market share of turbines commissioned to 22% in 2018, up from 16% in 2017, according to data from Bloomberg New Energy Finance.
Just over 10GW of Vestas-made onshore turbines were commissioned globally in 2018, BNEF said.
China’s Goldwind rose from third to second place, lifted by a strong performance on home soil, where it captured one-third of the 19.3GW market. (renews)

Focus on: Greening the planet

One-third of world’s new vegetation in China and India

China and India are “leading the world” in “greening” the landscape, a study finds, with the two countries accounting for one-third of the new forests, croplands and other types of vegetation observed globally since 2000.
The results, published in Nature Sustainability, also show that China alone accounts for a quarter of the human-caused greening observed since 2000 – despite containing only 6.3% of the world’s landmass.
In China, 42% of the greening comes from the expansion of forests while 32% comes from cultivated farmlands, the study finds. In India, 82% of the greening comes from new croplands.
Across the world, the rate of plant growth appears to be increasing. Scientists who study this phenomenon call it “global greening”.
One reason that plants could be growing faster is that humans are releasing billions of tonnes of CO2 into the atmosphere every year – and plants use CO2 to carry out photosynthesis. The process whereby increasing CO2 levels boosts plant growth is known as the “CO2 fertilisation effect”.
However, humans can also have a direct impact on the amount of vegetation found on Earth through the way in which they manage land. (carbonbrief)

Bamboo homes could be the future of affordable city housing

The creator of a low-cost house made of bamboo to tackle the chronic shortage of affordable housing in the Philippine capital has won a top international prize to design future cities in a rapidly urbanising world.
Earl Forlales, 23, won the first prize from the Royal Institute of Chartered Surveyors in its Cities for our Future competition. The prize money of £50,000 will fund a prototype, as well as actual units.
The house, known as CUBO, uses engineered bamboo, and can be put together in four hours at a cost of 60 pounds per square metre, according to a statement released Thursday.
The modular housing, which can be manufactured in a week, includes design elements such as a tilted roof that captures rainwater and reduces heat gain, and elevated stilts that prevent floodwaters from entering the home. (weforum)

WiTricity, a company that specializes in contactless EV charging, has acquired Qualcomm’s rival wireless charging tech. The two are keeping quiet about the financial details, though they did reveal that Qualcomm will become a minority WiTricity shareholder as a result of the transaction. Ultimately, it gives WiTricity access to more than 1,500 new wireless battery charging patents and patent applications, which could see its contactless charging system become the EV industry standard.
An MIT spinoff, WiTricity’s system relies on a floor pad that radiates a magnetic field to refuel parked EVs. In 2016, the company announced a prototype in partnership with GM that could be deployed in public parking spaces and garages, offering power at both 7.7 kW and 11 kW. At the time, WiTrcity said the tech could work with any EV model or platform. (engaget)

Tesla’s efforts to ramp up production of its Model 3 sedan are paying off and the vehicle surged past its competitors in the luxury car segment last year. Tesla produced a grand total of 145,846 Model 3s throughout the year and an estimated 138,000 of them were sold to U.S. customers. That made the Model 3 the best-selling luxury vehicle in the U.S. in 2018, a remarkable achievement given that EVs only made up 1.12% of total vehicle sales. (forbes)

The fracked gas industry’s long borrowing binge may finally be hitting a hard reality: paying back investors.
Enabled by rising debt, shale companies have been achieving record fracked oil and gas production, while promising investors a big future payoff. But over a decade into the “fracking miracle,” investors are showing signs they’re worried that payoff will never come — and as a result, loans are drying up.
Hints that gas investors are no longer happy with growth-at-any-cost abound. For starters, several major natural gas producers have announced spending cuts for 2019. After announcing layoffs this January, EQT, the largest natural gas producer in the U.S., also promised to decrease spending by 20 percent in 2019.
The days of unlimited low-interest loans for an industry on a decade-long losing streak might be coming to an end. (desmoblog)

According to scientists at Purdue University, the best way to charge electric car batteries may be to take them to a gas station, and have them serviced at an instant oil-change shop.
The two scientists have been testing a new type of flow battery in golf carts, and say the battery now develops enough energy density and power to be viable in a car.
Purdue calls it the “instantly rechargeable” battery. It uses a water, ethanol, and salts and either an aluminum or zinc anode. The electrical charge in the liquid cathode-electrolyte are depleted with use. (greencarreports)

Have a good weekend.