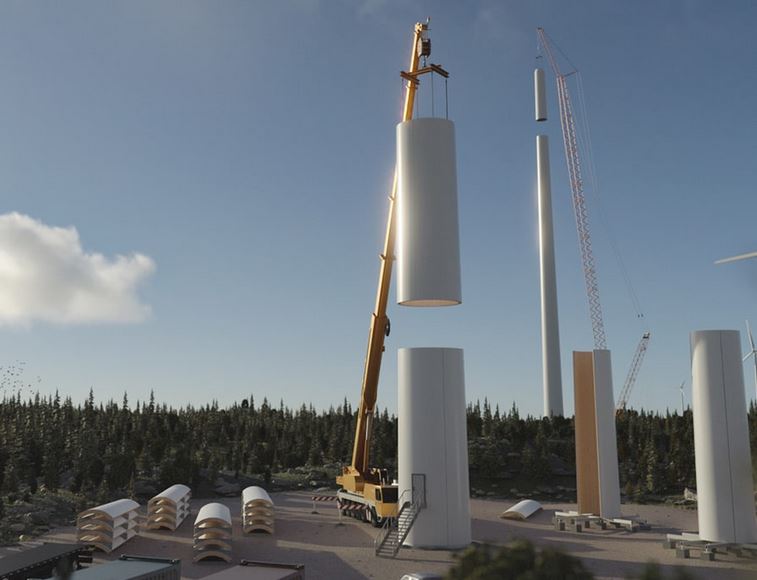 So, we do have a windfall tax on oil companies in the UK, but the not-an-emergency budget has left hanging the prospect that electricity generators might be hit too, which would undoubtedly affect renewables investment and, yet again nothing on energy efficiency.

TotalEnergies to Buy Stake in US Renewables Firm Clearway Energy
TotalEnergies SE said it will acquire a stake in a large US renewables developer, another move by the European energy giant to expand its footprint in the American power sector.
The French firm agreed to buy a 50% stake in Clearway Energy Group from Global Infrastructure Partners for $1.6 billion in cash, it said in a statement on Wednesday. GIP will also receive a stake in a TotalEnergies unit that has ownership in SunPower Corp., a US residential solar company, the statement said.
TotalEnergies bought a controlling stake in SunPower in 2011. The Clearway acquisition brings Total’s US renewable portfolio to more than 25 gigawatt capacity. (Bloomberg)

Royal Mail, Co-op and M&S pension schemes target net zero
Royal Mail, Co-op and Marks & Spencer (M&S) have this week pledged to halve the emissions of their pension scheme portfolios by 2030, and to deliver net zero across these investments by no later than 2050.
The announcements were made during the Pension and Lifetime Savings Association’s (PLSA) investment conference in Edinburgh. Together, the three companies’ represent more than £30bn in pension assets.
Yet despite the latest flurry of net zero pension commitments, more than £1.5trn of UK pension savers’ investments still remain in schemes that have no such targets in place, according to Make My Money Matter (MMMM), the green pensions campaign.
MMMM co-founder Richard Curtis therefore urged other UK pension schemes to follow the lead of M&S, Co-op and Royal Mail. (businessgreen)

UK economy could gain billions from low carbon transport
Analysis published in a new report has shown that transport decarbonisation could result in a multi-billion pound boost to local economies across the country, but says action from the Government is needed.
The Association for Renewable Energy and Clean Technology (REA) and Hitachi Energy’s report – ‘Decarbonising Transport: Enabling local energy solutions’ – is an analysis of the energy requirements to deliver Net Zero transport systems in local areas across the UK.
The report uses Southampton and the Solent as a case study as it is one of few that includes national transport hubs across land, sea, and air. The Solent maritime sector currently contributes around £6 billion of GVA per annum, around 20% of the Solent economy. This could increase by £2 billion per annum through forecast shipping volume growth.
However, if progress is not made in transport decarbonisation, there is both a risk that this economic growth potential will be lost and that Net Zero targets will be missed. The report – launched today [Monday 23 May] at the Houses of Parliament – calls on the Government to deliver a consistent framework, guidance and resources to local areas so they can produce transport decarbonisation plans. (REA)
Download the report HERE

UK finance ‘faces £340bn in losses’ without action on climate change
UK banks and insurers will end up shouldering nearly £340bn worth of climate-related losses by 2050, unless action is taken to curb rising temperatures and sea levels, the Bank of England has warned.
The numbers emerged from the Bank’s first climate stress tests on seven of the UK’s largest lenders. These involved three climate scenarios over a 30-year period, covering physical and transition risks, including one in which governments fail to take further steps to curb greenhouse gas emissions, resulting in average temperature rises of 3.3C, and a 3.9-metre rise in sea levels.
The regulator found that without early action, companies would suffer a surge in loan and mortgage defaults, investment losses, and climate-related lawsuits – particularly for insurers – worth £334bn across the UK’s 19 largest banks and insurers by 2050. (guardian)

Maxus T90EV – officially the UK’s first fully electric pick-up.
Whilst Americans queue for the Ford F-150 Lightning (see last week’s Titbits), we in the UK can celebrate the arrival of a first electric pick-up courtesy of Maxus (a division of the Chinese firm SAIC, who also now own LDV)
The Maxus T90EV is a fully electric variant of an existing petrol model sold in China. It therefore has the standard chunky looks of a pick-up, which means it should have no problem with acceptance in the market here. It is launched with an 89kWh battery pack, which powers a 200hp electric motor at the rear. According to Maxus, it’ll offer a range of up to 198 miles. (leasing)

Huge artificial “green hydrogen island” proposed for North Sea
A leading Danish investment firm has proposed a huge artificial “hydrogen island” in the North Sea which would be connected to 10GW of offshore wind, and capable of producing one million tonnes of green hydrogen each year.
Copenhagen Infrastructure Partners (CIP) says the proposed island, to be called BrintØ, or “Hydrogen Island”, could provide up to 7% of Europe’s expected hydrogen use in 2030.
The island would be located on the Danish part of Dogger Bank, a massive shallow sandbar stretching across the North Sea from the east coast of England across to within the North Sea boundaries of Denmark, Germany, and the Netherlands.
Extending over 17,600 square kilometres, water depths range from 15 to 36 metres, making it a perfect site for offshore wind farms due to low water depths and strong wind resources, including the 3.6GW Dogger Bank offshore wind farm close to England.
CIP says energy islands will be crucial to supporting the 180GW of offshore wind that is planned for the North Sea. (reneweconomy)

Stora Enso and Modvion Partner to Expand Use of Wood for Wind Turbine Towers
Stora Enso and wood technology company Modvion are partnering to establish wood as the material of choice for wind turbine towers. The collaboration’s purpose is to demonstrate the vast possibilities in using wood in demanding constructions.
Modvion builds wind turbine towers with laminated veneer lumber (LVL), which is stronger than steel proportionate to its weight. These towers are built in lightweight modules that are transported on public roads without permits or road reconstructions, making it easier to build taller towers at a lower cost. Taller towers reach stronger winds, leading to more cost-efficient energy production.
Furthermore, using wood, a widely available and renewable resource, can reduce the CO2 emissions for the tower by 90% while also storing carbon dioxide that has been taken up by trees during their growth. (renewableenergymagazine)

In Tanzania, Carbon Offsets Preserve Forests and a Way of Life
Deep in the Rift Valley of East Africa, close to some of the most ancient human remains ever unearthed, one of the continent’s last hunter-gatherer tribes is embracing 21st -century environmentalism. The Hadza people, often called “the last archers of Africa,” are selling carbon credits generated from conserving their forests and using the revenues to employ their youths as scouts to keep forest destroyers away.
Starting this March, some 1,300 Hadza and members of the cattle-herding tribes with whom they share the Yaeda Valley of northern Tanzania, began receiving the first payments of what will be nearly half a million dollars annually from a local social enterprise, Carbon Tanzania, for protecting woodland hunting and grazing grounds across an area larger than New York City.
The project will radically extend an existing decade-old carbon-offsetting initiative on Hadza land north to the edge of the Ngorongoro Conservation Area, one of Africa’s most iconic wildlife havens. But, unlike the Ngorongoro reserve, which was in part created by expelling local people, this project will embrace the skills of the hunting Hadza as custodians of the forests and friends of their wildlife. (yale360)

Focus on: Methane locked in permafrost

Thawing Permafrost In Sweden Releases Less Methane Than Feared
A study in northern Sweden found that melting permafrost released one tenth as much methane as expected, suggesting emissions from thawing Arctic tundra could be less than previously feared.
Once Arctic permafrost melts, microbes are able to consume the once-frozen organic matter trapped in the soil. As a byproduct of this process, microbes produce large amounts of methane, an extremely potent greenhouse gas. Scientists have long warned that rising temperatures would spur the release of more methane in the Arctic, leading to yet further warming. But new research on melting permafrost in Sweden suggests such emissions may be much smaller than predicted.
For the study, scientists gauged emissions from one swath of permafrost that thawed in the 1980s and another that thawed 10 to 15 years later. Emissions in the first area were 10 times less than in the second. That’s because as ice melted underground in the first area, water on the surface began to sink down into the soil. As the surface dried out, new plants emerged that helped keep methane emissions buried underground. (yale360)

UN body makes ‘breakthrough’ on carbon price proposal for shipping
At the International Maritime Organization (IMO) last week, countries broke a deadlock on mid-term measures to decarbonise the industry.
The meeting concluded that there was consensus to price shipping emissions “as part of a basket of mid-term measures,” according to a summary by the University Maritime Advisory Services (UMAS), which is partnered with University College London’s (UCL) Energy Institute. There was general support for adopting a “well-to-wake” approach and pricing emissions from fuel production to consumption onboard a ship, UMAS said.
Market-based, decarbonisation measures on the table include technical ones, like introducing a fuel standard, as well as economical ones, like setting a global carbon tax for the industry. They will be discussed at a meeting of the IMO’s environment committee (MEPC) next month. (climatechangenews)

US Navy launches climate plan
The US Navy has released a climate strategy, looking to cut its carbon emissions and move to low carbon fuels.
Released as part of the Biden Administration’s 2050 net zero goal, this 2030 strategy will see the Navy begin to adopt hybrid engines for ships and planes and reduce overall fuel consumption.
Rising sea levels, high temperatures and flooding are extremely impactful on the Navy’s operations – and have been quoted as reasons for pushing through a climate plan with haste.
The plan urges officials in the Navy to report to Carlos Del Toro, Secretary of the Navy, within 90 days, ways that climate adaptation can be strengthened and quickened. (futurenetzero)

Hydrogen production method opens up clean energy possibilities
A new energy-efficient way to produce hydrogen gas from ethanol and water has the potential to make clean hydrogen fuel a more viable alternative for gasoline to power cars.
Washington State University researchers used the ethanol and water mixture and a small amount of electricity in a novel conversion system to produce pure compressed hydrogen. The innovation means that hydrogen could be made on-site at fueling stations, so only the ethanol solution would have to be transported. It is a major step in eliminating the need to transport high-pressure hydrogen gas, which has been a major stumbling block for its use as a clean energy fuel. (sciencedailly)