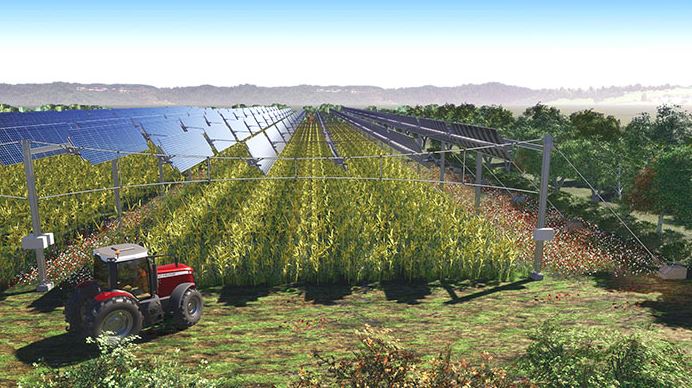 I had hoped to report plenty of good news on renewables coming from our new PM, but we may have to wait for that.
Looking elsewhere there is good news around, such as the record amounts of renewables being generated both here (see below) and in Europe. Also good news from an unlikely source: Chris Giles, the perennially pessimistic economics editor of the FT hails the response in Europe to the gas supply disruption and proclaims that the end of the energy crisis is in sight. Well worth a read HERE
He hails the ability of advanced western economies to respond effectively to adverse price signals, and notes that Economists predicted the effects of that response better than energy experts.

Solugen raises $357 million
Chemical companies have historically used petroleum, natural gas and phosphates to make their products, exacerbating air and water pollution.
A start-up called Solugen aims to replace many of these ingredients with chemicals using renewable resources like simple sugar.
Co-founded in 2016 by CEO Gaurab Chakrabarti and CTO Sean Hunt, Solugen designs and grows enzymes that can turn sugar into chemicals that are needed to make a variety of products and used in many industrial applications.
The company’s bio-based chemical offering already includes water treatments, a chemical that makes concrete stronger, another that makes fertilizers more efficient and detergents that are strong enough to clean a locker room or mild enough to be used on facial wipes.
Lowercarbon is one of several venture firms participating in a new $357 million round, alongside Singapore’s sovereign wealth fund, GIC, and the Baillie Gifford investment management company. The deal brings Solugen’s valuation north of $1.8 billion and its total capital raised to over $400 million. (cnbc)

Britain’s wind farms set new generation record
Britain’s fleet of wind turbines generated more electricity than ever before over a 90-minute window earlier this week, according to statistics from the electricity grid operator.
Between 11:30 and noon on Wednesday, Britain’s wind farms generated 19.9MW of electricity meeting 52.2 per cent of total demand, the figures from National Grid ESO reveal.
Trade body RenewableUK said the figures marked a new generation record for Britain, although it fell short of the record for wind power’s share of the grid which was set at 64 per cent on 29 January this year.
However, wind power supplied 50 per cent of the grid’s overall power needs across all of Wednesday. (businessgreen)

Centrica injects first gas into reopened Rough store
Centrica has made its first injection of gas into the Rough storage site in over five years, having completed engineering upgrades over the summer and commissioning over early autumn. The re-opening comes as the price of gas in Europe plunged, as unseasonally warm weather kept the continent’s existing storage facilities full of gas.
Centrica said the initial work would allow it to store up to 30 billion cubic feet (bcf) of gas for over winter 2022/23 – around 20% of its previous capacity. That adds 50% to gas storage within the UK. Now Centrica will inject gas into the facility when prices are low and sell it into the UK when the price is higher. (newpower)

Osprey reduces prices at EV chargers
Electric vehicle charging provider Osprey has announced that it is reducing its prices to 79p per kWh across its network.
The company said the reduction had been enabled by the government’s Energy Bill Relief Scheme.
Ian Johnston, Chief Executive Officer of Osprey Charging, said: “The team at Osprey has been working diligently throughout October with our energy supplier to get clarity on the government support to reduce the price burden on EV drivers.
“We have now achieved this reduction and are fulfilling the promise we made last month and passing on a saving to our customers immediately.” (energylivenews)

UK should match Norway’s 78% North Sea oil and gas tax
A Norway-style windfall tax on energy companies could raise £33.3bn extra by 2027, plugging a hole in government finances and helping keep energy bills low, analysis has found.
The new chancellor, Jeremy Hunt, is looking at extending the “sunset clause” in the energy profits levy by two years beyond 2025 as a result of the booming profits fossil fuel companies have been recording owing to the war in Ukraine.
But the environmental thinktank Green Alliance says he could go one step further and increase the levy by 13 percentage points, to 78%, which would match Norway’s tax rate on North Sea oil and gas firms. Currently, the UK government has put an extra levy of 25% on the firms, on top of the existing 40% tax, bringing the total tax to 65%.
Increasing it further to match Norway would raise an additional £6.6bn a year until 2027, the thinktank says, making up 17% of the £40bn-a-year fiscal hole, or equivalent to annual spending on policing and fire services. (guardian)

Rolls Royce join the party
I have spent the last few weeks highlighting ways in which electric cars will look to embrace affordable motoring.
Now for something totally different: Rolls Royce have announced that they will be launching late next year a full EV coupe called the Spectre. This magnificent beast will be yours for an estimated £400,000, will have a range of about 260 miles, will be quick and, of course totally silent. You would think RR and EV’s would be made for each other, so it shouldn’t surprise that this will be the first full range as the company expects to be all-electric by 2030.

RWE: Starting to walk the talk
RWE is bringing forward the closure of 3.1GW of lignite capacity at Niederaussem K & Neurath F & G from end 2038 to December 2029.
The timing of RWE’s announcement that it was accelerating the closure of German lignite capacity from 2038 to 2030 is a surprise in view of the need to prioritise security of supply especially as it is postponing the decommissioning of 1.2GW capacity at Neurath E & D from December 2022 to March 2024.
Carbon Tracker doesn’t expect coal phaseout discussions with Government, putting legislative procedures in place, to resume until next year. (carbontracker)

French farmers are covering crops with solar panels to produce food and energy
Agrivoltaics – the practice of using land for both solar energy and agriculture – is on the rise across France.
In the Haute-Saône region, in the northeastern part of the country, an experiment is being conducted by solar-energy company TSE. It is hoping to find out whether solar energy can be generated without hindering large-scale cereal crops.
Previous attempts to experiment with agrivoltaics have been through smaller-scale projects. But, keen to see if it can thrive on an industrial level, 5,500 solar panels are being spread over this farm in the commune town of Amance by TSE.
If successful, the crossover could be revolutionary for both the agricultural and solar panel industries. (euronews)

How Cold Seawater Can Heat Helsinki’s Homes
Helsinki is tapping an unexpected source of energy to heat its homes: cold water extracted from deep in the Baltic Sea.
The Finnish capital is joining Europe’s rush to find new sources of energy and reduce its reliance on imported fossil fuels with a new, carbon-neutral heating system. The city’s power company, Helen Oy, will partner with Spanish builder Acciona SA and local infrastructure company YIT Oyj to construct a tunnel for extracting water deep from the seabed, where it stays at a constant temperature. By processing the water through underground heat pumps, the system could generate enough heat to serve as much as 40% of the Finnish capital. (bloomberg)

All abord the Bicibus
Friday is a special day for kids in the Eixample area of Barcelona. That’s the day the bicibús travels down Entença Street toward its 3 schools. Although it’s a heavy commuter road that sees about 20,000 vehicles pass through daily, kids bike to school together there, safe in a group.
The bicibús starts off with just a few students and parents, with more and more joining as it travels along. In sum, more than a hundred kids and parents hop on their bikes and pedal down the middle of the street. Police vehicles escort the group, with officers traveling before, in the midst of, and behind the riders.
The fun expanded quickly, with more and more families in the area using the growing popularity of the bike commute to build community as they joined together for a safer, more environmentally friendly way for their kids to get to school.Other neighborhoods in Barcelona have created their own versions of the bicibús, too. Parents in Glasgow, New York, and San Francisco have been in touch with the Spanish bike commuters to learn how to create their own versions of the bicycle parade. (cleantechnica)
Watch the procession past the Sagrada Familia HERE

Food giants investing ‘record amounts’ in plant-based protein
Major food investment initiative FAIRR has published results of its engagement with 23 large businesses, revealing a record $1.7bn investment in alternative proteins in the first half of 2022.
The initiative, supported by investors collectively managing $68trn of assets, has today (26 October) published a report detailing its engagement with almost two-dozen large food and drink firms including ingredient suppliers, manufacturers and retailers, on the topic of protein diversification. FAIRR advocates for protein diversification as a means of reducing risk in the sector, including risks such as antibiotic resistance and climate risk.
The report reveals that 35% of the 23 businesses now have a time-bound, numerical target to increase sales of meat and dairy alternatives, up from 28% this time last year. One of the firms to have set a target this year is Ahold Delhaize’s Dutch supermarket brand Albert Heijn, which is now aiming for 60% of protein sales to be plant-based by 2030. Also praised in the report in Conagra Brands, the US-based company producing brands including Slim Jim, Gardein, Hunts and Reddi Whip.
Promisingly, the report also revealed that many companies are now able to offer plant-based alternatives to meat and dairy products at a similar price point. It states that Tesco’s ‘Plant Chef’ ready meal range is 11.6% cheaper than the supermarket’s own-brand ready meals including meat, for example. Similarly, Walmart now offers alternative proteins in its ‘Great Value’ own-brand line. (edie)

China Electric Car Sales — 35% Share Of Auto Sales In September
Plugin vehicles continue to be all the rage in the Chinese auto market. They grew 78% year over year (YoY) in September. They scored over 636,000 registrations last month, a new record.
Share-wise, with September’s record performance, plugin vehicles hit 35% market share. And the share could have gone higher, if the overall passenger car market hadn’t grown also — in this case, by 10% last month.
Full electrics (BEVs) alone accounted for 26% of the country’s auto sales last month! These brilliant results pulled the 2022 share to 29% plugins and 22% BEVs.
If electrification continues at this pace, expect in a year from now the plugin share to be at some 45%, with BEVs owning one third (33%) of the Chinese market! (cleantechnica)

China Building World’s Largest Offshore Wind Farm
Chaozhou — a city in China’s Guangdong province — has revealed ambitious plans for a 43.3 gigawatt facility in the Taiwan Strait. Operating between 75 and 185 kilometers off the coast of Chiuna, the new offshore wind farm will be 10 kilometers long and feature thousands of powerful turbines. Because the location is unusually windy location, the turbines will be able to generate electricity between 43 and 49% of the time.
Work on the project will start before 2025, according to Euronews Green. Once completed, it will eclipse the world’s current largest wind farm — the Jiuquan Wind Power facility that is also in China and which has a capacity of 20 gigawatts. According to EVWind, China unveiled the world’s largest wind turbine last week. It has a record-breaking rotor diameter of 252 meters and is capable of producing 13.6 megawatts of electricity. There is no word on how much this super sized facility will cost. (cleantechnica)